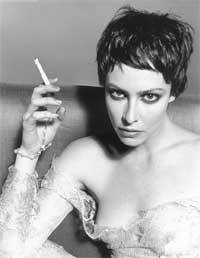 PARIS — Anna Mouglalis takes to her heels as well as wheels when getting around the French capital. The actress has been cruising around Paris on a moped for seven years.

“If I took the metro, it would be much too complicated in heels — and I like them very, very high,” she says in her distinctive low voice at the Café Bataclan. The bike also means Mouglalis can keep a low profile at a time when she has been thrust into the spotlight. Despite appearances in films like “Merci pour le Chocolat” in 2000, it’s only of late that she’s become well known.

At the end of last year, suddenly, Mouglalis was everywhere. She popped up in three movies within four weeks: “Novo,” in which she helps her amnesiac lover regain his memory; “La Vie Nouvelle,” portraying a Ukranian prostitute, and in the thriller, “Loup de la Côte Ouest.” But anyone who missed her on-screen could learn more about the dynamic 24-year-old at the newsstand, where she landed the covers of French Elle and Le Monde, and coverage in the daily, Liberation, and the weekly, Paris Match.

Of course, Mouglalis had caught Karl Lagerfeld’s eye months before and was signed in October 2002 to be the house’s ambassador, representing its fashion, watches, jewelry and Allure fragrance. Like Mlle. Chanel, Mouglalis loves suits. But the actress, born in Nantes to a Greek father and French mother, is no regular beauty maven. Her recently clipped coif wasn’t a pro job — her locks were hacked off with a knife in “La Vie Nouvelle.”

“It was somewhat liberating,” she says of the dramatic change.

And she might be up for an even more dramatic change: a trip to Hollywood. “There’s something incredible about it,” says Mouglalis, a great admirer of M. Night Shyamalan, David Lynch, Martin Scorsese and Francis Ford Coppola.

She’s certainly more glam than her French contemporaries, like Virginie Ledoyen, who dresses like a secondhand rose in her off-screen hours. Mouglalis is one young actress who won’t be found scrounging around at the flea market.

“Markets,” she says, “are for buying vegetables.”