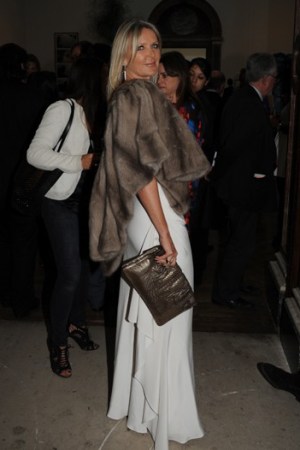 In addition to the hundreds of large and small artworks for sale, there was another major attraction for Lennox. “I just saw Tracey Emin — I’ve just read her memoirs and I want to go up to her and tell her I love her,” she confessed.

The preview party, which kicks off the London summer social calendar, takes place in the 200-year-old galleries at the academy’s building on Piccadilly. The sale raises funds for the academy’s education and schools program as well as future exhibitions.

Meanwhile, Laura Bailey, who was there with her partner Eric Fellner, was trying to broaden her artistic horizons. “I’m sadly attracted to the most expensive things in the room, so I’m trying to change that,” she said with a smile. While wandering the galleries, guests sipped Champagne and nibbled on Serrano ham and honeyed figs, oysters and rare beef with rocket.

For Hindmarch, this year’s party marked her last year co-chairing the event, which she said “feeds her brain,” when she’s designing her accessories collections. “Art and fashion are so related, so this is a real starting place for me,” she said. “And it’s a truly British thing.”

Indeed, actress Chloe Moretz, who’s in London shooting Tim Burton’s film “Dark Shadows,” said she spotted a number of pieces in the show that would suit Burton’s dark, Gothic sensibilities. “There are so many things here that I’m like: ‘That’s Tim, that’s Tim and that’s Tim,’” said Moretz with a grin.