A new biography paints a vivid picture of the backstage power broker who crossed paths with every significant figure of the second half of the 20th century. 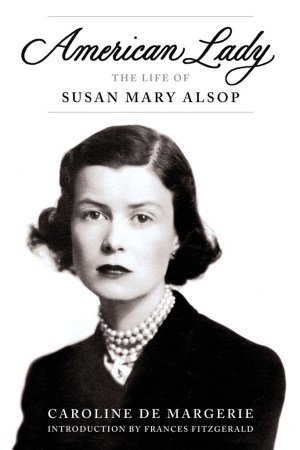 PARIS — Susan Mary Alsop crossed paths with every significant figure of the second half of the 20th century, from Winston Churchill and Wallis Simpson to President John F. Kennedy and Nancy Reagan.

“Henry Kissinger said of her that more diplomatic treaties had been signed on her drawing-room table than in ministries,” notes French author Caroline de Margerie, whose biography of the backstage power broker, “American Lady — The Life of Susan Mary Alsop,” was published by Viking this month.

“Her idea, as that of other men and women of her time, was that bringing the high and mighty together in congenial circumstances, plying them drink and with cigarettes, would help them relax, cut deals and work for the greater good,” adds de Margerie.

She paints a vivid picture of an elite social sphere, taking readers from postwar Paris to the Camelot years in the U.S. capital, and beyond. De Margerie found this world especially fascinating in light of her own former career as a diplomat, which included serving as European adviser to French President François Mitterrand in the run-up to the signing of the Maastricht Treaty in 1992.

“I saw ‘history on the boil,’ as Nancy Mitford said of Susan Mary — the fall of the Berlin Wall, the overthrow of the Soviet Union, central Europe coming into its own,” she recalls. De Margerie, who has also penned a biography of “Cyrano de Bergerac” author Edmond Rostand, is now a member of the Council of State, France’s highest administrative court.

But she was not just interested in Alsop’s brilliant social circle or her legendary style, which made her a magnet for couturiers like Christian Dior, who would regularly lend her gowns.

The author goes behind the facade to reveal a passionate personality torn between her sense of duty and her personal desires. Namely, she provides fresh insight into Alsop’s affair with Duff Cooper, Britain’s ambassador to France at the time, with whom she had an illegitimate son while married to U.S. diplomat Bill Patten.

De Margerie had access to some 500 previously unseen letters written by Alsop to her lover, and was also allowed to read the unabridged version of Cooper’s famed diaries. “I could follow day by day, as nobody had, this love story,” she says.

During this period, Alsop also kept up a prodigious correspondence with her mother as well as her best friend, Marietta Tree.

“They chronicled not only her life in Paris, but life in Paris during the postwar years when Paris rebuilt itself, and the whole country rebuilt itself, so she can be thought of as a white-gloved version of Janet Flanner,” says de Margerie, referring to the longtime Paris correspondent of The New Yorker magazine.

Following Patten’s death, Alsop married columnist Joseph Alsop, and the two formed one of Washington’s most prestigious couples in an era when the nation’s capital was packed with them.

“The fact that he was homosexual wasn’t known at the time in Washington circles. He kept it quiet. Those of his friends and family in the know kept it quiet as well. Susan Mary herself was aware of it, because he’d told her so, but I think she thought she’d changed him — a naïve way, probably, of seeing things,” says de Margerie.

“What was important was their public life together. They set out to be one of Camelot’s leading couples and they certainly achieved it, together. Both brought to the achievement their own qualities and knowledge, intelligence, relations, and more practical things, such as Susan Mary’s excellent wine cellar and her Dior and Balmain dresses. The fact that she was so stylish certainly appealed to President Kennedy and to Jackie Kennedy,” she adds.

In her later years, Alsop would have a second career as a writer, penning several books, including a biography of Lady Victoria Sackville, and becoming a contributing editor at Architectural Digest magazine. But the reed-thin doyenne of Georgetown also developed a drinking problem, a reflection of her hidden inner turmoil.

“Perfection was something she imposed upon herself, and it certainly is linked to the fact that she wanted to please her mother and felt she couldn’t,” says de Margerie.

“A great deal was expected of Susan Mary. She didn’t quite feel up to it, but she struggled to do her best all her life. When her mother died, she was a very old lady, and it was too late to make it possible for Susan Mary to relax, so the extra glass of sherry did help to unwind,” she adds.

Ultimately, Alsop comes across as a woman ahead of her time.

“If she’d been born a generation or two later, she’d have been a diplomat or a journalist,” said de Margerie. “But at the same time, one mustn’t belittle achievements these behind-the-scenes players had in a more modest and invisible manner.”

‘Visitor From a Company Town,’ Featured in WWD in 1978

LONDON — “I think London society is infinitely the most interesting and stimulating in the world — without any question,” says Susan Mary Alsop, speaking in an adamant tone from the comfort of Evangeline Bruce’s turquoise silk sofa.

Although Susan Mary always stays at her friend’s pied-à-terre when she visits London, she says she still can’t find the downstairs loo. “Where HAS Evangeline hidden it?” she laughs, then, before the visitor can answer, “Isn’t this apartment divine? It used to belong to Lady Melbourne, the mistress of Lord Byron.”

Here to publicize her second book, “Lady Sackville” (her first, “To Marietta from Paris, 1945-1960,” was published in 1973), Susan Mary is surrounded by her friends and loving every second of her stay. “God, London is exciting,” she exclaims.

She has been wined, dined and praised for the book ever since she arrived. But the best thing of all is that Lady Sackville’s family and acquaintances, such as Diana Cooper, like it, she says. Dressed in a skinny navy blue Bill Blass evening dress, family diamonds and endless pearls given to her by ex-husband Joseph Alsop, Susan Mary sits for a quick interview before dining at the Café Royale with Nigel Nicholson (the book is about his grandmother); Lord Sackville, and Lady Alexandra Metcalfe. After dinner she is dashing to a ball at the Royal Academy.

So far it’s been a busy schedule, a weekend at Oxford with old friends Sir Isaiah and Lady Aline Berlin, who gave a luncheon for her at All Souls College. Guests included a galaxy of figures from Oxford and old friends such as Charles and Jayne Wrightsman, who traveled from London. Ann Fleming also gave a dashing lunch, also in the country, the next day.

Back in London, there were even more parties: Old friends Lady Cooper and Lady Hartwell gave glamorous lunches for her filled with politicians and literati. Susan Mary was impressed that all the politicians showed up at a party given for her by George Weidenfield on the night that an important vote took place in Parliament.

“In Washington,” Susan Mary says, “they would have got their secretary to call at 8 p.m. to say they couldn’t possibly make it. And you just wouldn’t get that mixture of literati, political figures and old friends in such a relaxed atmosphere anywhere else in the world.”

All of which sounds surprising coming from such a long-term member of Washington’s inner sanctum. “Joe and I attempted that kind of mix but never quite pulled it off. There’s no question that Washington is the smallest capital in the world, even though it’s improved since we have the great museums and the Kennedy Center. But it’s still a company town.”

This, she says, is as true today as it was nearly a century ago in Victoria Sackville’s day. In 1881, the young Miss Sackville arrived in Washington, an insecure 18-year-old.

She rapidly took the town by storm as her father’s hostess at the British Embassy and continued to kick up a storm for the rest of her life. “Washington is a provincial Southern city to this day,” says Susan Mary. “Everybody still knows when somebody steals a cook…even though there are practically no cooks left.”

But Susan Mary is much too polite to belittle Washington. (The nearest she approaches criticizing anyone is to call them parsimonious.) Washington society is improving, she says. For proof, she mentions her good friends the Peter Jays. “By God — there’s a salon,” she exclaims. “It’s the only house where the Carter administration members go the second they are invited. The other embassies are so jealous they could die.”

Recently, the Jays honored Susan Mary’s ex-husband. It was a very distinguished dinner, and Susan Mary and Margaret Jay chose the flowered tablecloths together at Bloomingdale’s beforehand. They replaced Lady Ramsbottom’s plain white ones, she explains.

At home, Susan Mary sees what she calls a mixed bag of people. Friends such as Nancy and Henry Kissinger. “Now there’s a house that’s enormous fun to go to. I think that he is even better in retirement than he was in office. He’s very calm, very unvicious and very kind. He wants to help the new administration all he can.” Of Katherine Graham’s evenings she says, “They are all pretty much political…which, of course, is natural.”

As natural as her own progression to biographer of a remarkable woman — skillfully mixing words and cultures like an ambassador without an embassy and observing it all with a meticulous eye for detail and accuracy.

She’s too meticulous to comment on her next project until absolutely certain what it is. One thing she knows is that it won’t be about a certain moment in Washington that she knew very well. “I wouldn’t think of writing another word about the Kennedys,” she insists.

Five years later, in October of 1983, Susan Mary Alsop spoke to WWD again, this time with Susan Watters. Alsop, who had been widowed, married again and then divorced, said that she didn’t intend to ever remarry. “It’s a lot of work to take care of a man,” she noted. “And I’m still very much attached to my former husband [Joe Alsop]. We didn’t hit it off in the same house, but I talk to him at least twice a day.”

Single women today aren’t as lucky as those in her youth, she said. “My generation was spoiled and secure — life was a lot more fun. Now people are obliged to work their heads off; now women are worried about how to keep a babysitter for another two hours.”

As for the idea of women paying for dinner dates, she said, “Oh, that must be a howl. I can just imagine the dialogue. ‘I’ve had such a lovely time. I’ll have some more caviar. It’s on me.’ ”

Among Democratic politicians, she favored Sen. Ernest (Fritz) Hollings. “I think every word he says shows such wisdom and courage. He’s for conscription; so am I. He supports a moderate pro-defense budget; so do I. And he’s very just on civil rights.”