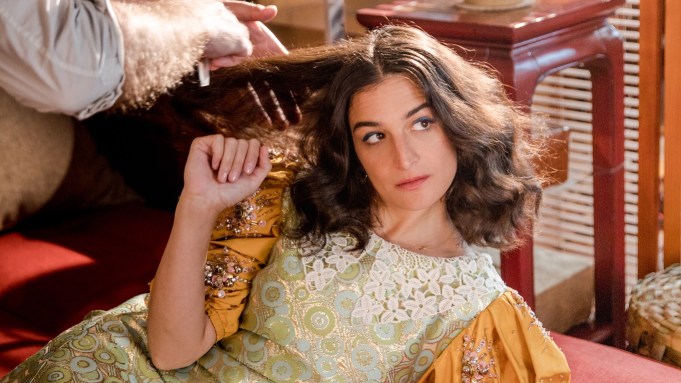 Jenny Slate is in the glam chair when her Kirkus Review comes in. It’s positive — “A uniquely talented writer and performer offers up an unexpectedly uncommon approach to autobiographical writing” — and it feels good, of course, though Slate doesn’t need the validation. She’s left it all on the table with her book, “Little Weirds,” her first solo, proper literary endeavor (she and her father co-wrote a book about her childhood home in 2011) and quite likes what she’s come out with. But a good review feels good, and it’s part of the equation in this particular moment that has taken today from being a shy day, for Slate, into one of confidence.

(Another element would be the introduction to a Louis Vuitton embroidered mini dress, which is met with squeals of, “Oh, God! Oh, God!”).

Slate is in a uniquely personal moment in her career, promoting her first Netflix special “Stage Fright,” which shows both her standup but also her family and childhood home, and “Little Weirds,” a sort of collection of essays, almost entirely personal and spanning her life, that has been described both by critics and Slate herself as hard to describe.

“It’s little pieces of lightness, sweetness and sorrow,” Slate explains, in Williamsburg at the end of a handful of press days, the journey back to Los Angeles looming before her. “They’re somewhere between a wish and a creed. Yeah. Some of them are kind of like essays, but there’s just a lot of magical realism in there.”

Slate, who is 37, has faced a long road toward the authentic, vulnerable, feminist wisdom she produces in “Little Weirds.” Growing up in Milton, Mass., she had few friends, she says, and found middle school a “problematic” time.

“I always really wanted to have a boyfriend and be at the center of things. And that just wasn’t my time,” Slate says. “I always dreamed of being an actress and of having a light shined on me. And being able to shine myself onto the culture.”

Her present work, then, is her reflection onto culture in the most personal form, and a marker of how much more comfortable she is with herself.

“I am at a point now where I think I’m mature enough to be like, ‘OK, is that really about you?’ You have to let other people have their processes, and that’s something that I’m learning,” she says. “I really want to write about how I quiet fears or live with them, because a lot of dealing with that has been very beautiful for me. But also it’s painful and I don’t know what else to do except try to make something out of it, which is also why I wrote this book and did this special.”

She describes herself as both “really sensitive” and “very open about who I am,” the result of which has led to a very emotionally led exploration of self in her writing.

“I have definitely reached a point where I understand that being able to make my work is the most valuable, and validates me the most. And being able to know how to express myself is the most important,” she says. And then: “It’s sort of like a record of where I’ve been. In times when I lose confidence, I can look back and, just like if you’re someone who built a house, let’s say, and then you have a hard year, you can go back and look and be like, ‘Well, I’m still the person that had the gumption to build this house.’ That’s how it feels for me to do the work.”

Slate, who is known as an actor for work in projects like “Obvious Child,” “Bob’s Burgers” and “Big Mouth,” says acting isn’t so much on the back burner but that in the past few years, she’s made the conscious decision to create for herself the work she felt she wasn’t being offered (she is, however, very interested in being in a Jordan Peele film).

“I’d love to be in a very scary, very intelligent, frightening film. I feel very scared a lot of the time and I’d love to put that into performance,” she says. “Really what I just want to do is to be able to use the feelings that I have. Partially in order to burn them off, and partially in order to just repurpose them so that I’m not just sitting around freaking out.”

With the book out, she heads on the road for the month of November, doing readings in independent bookstores and, in a handful of cities, she’ll perform the “little weirds” as monologues.

“I wrote this book because I wanted to talk to people about how I felt. So saying the things out loud seems right, and in a way it feels like all of my standup has led to this more tender moment,” Slate says. “And I like to think that I’ve earned it. Yeah, because you can’t just show up and read your diary to people.”