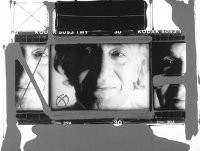 PARIS — “I like the streets,” says William Klein, the cranky old man of American photography. “I grew up in the streets.”

Now arrives his latest, “Paris + Klein” (DAP), accompanied by an exhibition of some 80 images at the Hermès flagship on Madison Avenue opening April 9. For those who don’t know Klein, “Paris + Klein” proves that at 75, he has lost none of the feral roaming instincts that drove him to the streets “like a maniac” some 50 years ago.

This newest opus opens at the thronged Bastille Day celebrations in 2000 and roams on through all 20 arrondissements — to gay pride parades, funeral marches, political rallies, beery public festivals, frenzied backstage fashion scenes, elbow-filled charity balls and fleshy public hammans. Perhaps 4 out of 330-plus images in “Paris + Klein” contain but a single person. The rest strain to capture the multitudes of la grande publique.

The only question is why he didn’t do it earlier.

“I didn’t think of doing a book on Paris because I’m living here,” says Klein, in his apartment above the trafficky main street along the Luxembourg Gardens. “In Moscow or Tokyo, I discovered something I didn’t know. Paris? It’s not exotic. It’s not something that excites me.”

All the same, after completing his last film project — a documentary about Handel’s “Messiah” — a bout of post-production blues drove him out of the house, Leica in hand.

“I discovered I didn’t know Paris that well,” acknowledges Klein, even though he’s lived here most of his adult life. “It was an adventure treating Paris like some foreign land.”

If the resulting headlong rush through the City of Light doesn’t quite surprise as “New York” did in 1955, it’s only a testament that Klein’s early style — grungy and ad hoc, gamey and democratic, inspired by the voyeur — has become part of the modern canon.

Klein was raised in the scruffy upper reaches of Manhattan’s West Side. Dreaming of a life as a painter in Paris, he joined the army and went to Germany during World War II. Afterward, he was one of 25 GIs selected for a goodwill exchange program at the Sorbonne in Paris, where Klein even studied in the studio of Fernard Leger. But it was a chance meeting with Condé Nast’s Alexander Lieberman that brought him to New York in 1954 and gave him a new career with a camera.

“I saw New York differently after being in Paris for a few years,” he recalls. “I saw it from two points of view — one part of me was the wiseass New Yorker, the other was a snotty Parisian.”

The snotty Parisian in him was amazed by the city’s crowds and rogue energy. It was the wise-ass New Yorker, perhaps, that believed he could catch it all on film.

“Everything I saw knocked me out,” Klein says. “I went into crowds and shot point blank. I was like an anthropologist with the Zulus. They need to be studied and indexed.”

His attempt to contain the entire city between two covers — like a fission reaction held uneasily in a china teacup — led him to design innovations as well. Klein laid out “New York” with a rascally disregard for all the mid-century conventions — clean focus, neat composition and crisp prints with tidy white borders — and created a new kind of photo book.

“People were either knocked out or pissed off,” says Klein, who is clearly pleased with either reaction. “I was using, on big double pages, photographs most photographers would have thrown out — blurry, grainy, whatever.”

But perhaps the real essence of Klein’s work arises from his genius as an improviser. He offers a telling anecdote from his teenage years, when straying too far into a dodgy neighborhood could invite trouble from local toughs itchy for a rumble.

“Whaddya lookin’ at,” the older kids would demand. Klein would look right back, reach into his pocket for a packet of cigarettes and ask, “gotta light?” No more trouble.

Likewise, a decade later, when he was pointing a camera at anyone he found, he recalls similar accusations.

“Whaddya takin’ these pictures for,” someone would demand when Klein stuck a lens under his nose.

“Uh…I work for the Daily News,” answered Klein, riffing on an inspiration — the look of the tabloid’s smeary, sensationalizing front page.

Inevitably, Klein got his shot. The most famous was of a kid firing a toy gun straight into the viewfinder, his young face scrunched up as mean as could be. Klein spotted him playing in a doorway and shouted at him, “look tough!”

Klein wasn’t the first to photograph his cities. Margaret Bourke-White and turn-of-the-century Paris photographer Eugene Atget both roved their respective streets, but they generally looked through a more wistful lens.

Klein’s “New York,” on the other hand, was like a visual sentinel of things to come. His explosion of lights on Broadway and 50-foot-tall movie marquees celebrates the quantum growth of celebrity culture. In grocery stores, Klein saw the proto-Pop graphics of Franco-American brand soup cans and gaudy soap boxes — the kinds of images later immortalized by Andy Warhol. In the autumn of 1954, Klein felt the buzz of the electric future.

One of the ironies of his career, though, is that he was never able to capitalize on his vibrant early work, acting more like the mad hare than the steady tortoise. Lieberman gave him the chance to shoot fashion for Vogue and he repaid the favor, a few years later, with “Who Are You, Polly Magoo?” A spoof of the fashion industry, it was edgy enough to get him banished from the kingdom. However, it was never commercial enough to outlive another fashion spoof, “Funny Face,” which Klein’s contemporary Richard Avedon worked on. Klein bit the hand that fed him.

“It was the beginning of my split with Vogue,” says Klein, who never shot for American Vogue again. “I made fun of fashion, Vogue and Diana Vreeland. She’s somebody nobody can touch, like the Virgin Mary. She got on my nerves. Of course, she was the model for Anna Wintour and all these editors today, except that she was original. I satirized all that.”

Klein has enjoyed more general acclaim in France than at home. A major exposition last year at La Maison Europeene de la Photographie, he boasts, was their most visited show ever. (The Howard Greenberg Gallery in New York is also showing work from “Tokyo” until May 3.)

“Being an expatriate doesn’t go down well in America,” Klein explains. “My way of living and working is that I’ll do my thing. I went from one thing to another. That annoyed people. They didn’t know how to categorize me.”

Klein sees himself like Man Ray, the expatriate American in Paris who was ignored by the American art establishment until after his death. Now, Klein points out, Man Ray is considered a master, a “giant.”

“I’m considered a marginal character,” Klein says. “Does that annoy me? Yeah, a little bit. But as Malcolm X [whom Klein met in making “Muhammad Ali: The Greatest,” showing April 11 at Film Forum] said, ‘The chickens come home to roost.’”

Klein has never doubted his own contribution to photography. Today more than ever, it seems, he sees himself as the fox in the henhouse.