Catching up with Christian Bale about his latest starring role in the thriller “The Machinist.” 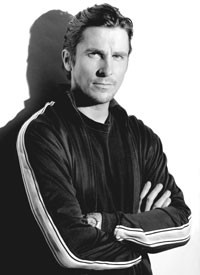 NEW YORK — Christian Bale would likely shudder at the label of beefcake but, to be fair, the 30-year-old actor has taken his shirt off in his share of movies. Usually he appears as the toned and well-built male wonder, which has earned him the loyal and mostly female cult following known as “Baleheads.” (Think “American Psycho” and “Reign of Fire.”) But for his latest film, “The Machinist,” the 6-foot, muscle-bound Brit whittled himself down to a harrowing 121 pounds.

Talk about sacrificing for your art.

In the film, touted as a psychological thriller, Bale plays Trevor Reznik, a man so besieged by guilt that he hasn’t slept in a year. “The Machinist,” which also features Jennifer Jason Leigh, was written by Scott Kosar, who counts “The Texas Chainsaw Massacre” and “The Amityville Horror” among his credits. Bale’s character works in a machine shop, is ill, paranoid to the point of distraction and experiences disturbing hallucinations. He can barely keep down a meal, let alone fall asleep, and spends an inordinate amount of time scouring his bathroom tiles with bleach.

Not many actors would have gone to quite the extremes Bale did; his diminished physical state is nothing short of shocking. But he was determined to fit the part.

“I started out with lots of running, but then my legs just got too weak and I was more stumbling than running,” recalls Bale, seated in a club chair at the bar of Essex House. “Then I couldn’t do anything but walk. And gradually I just started shrinking and shrinking.”

Once Bale had lost 54 pounds and was down to 130, he realized he was only nine pounds away from the script’s original weight, 121. Director Brad Anderson hardly expected Bale to aim for such a realistic — or indeed dangerous — state.

“None of us really thought that I would actually get to that,” explains Bale. “I just assumed that I would be around 145. But then I just decided I was going to go for it. It’s just an extra nine pounds, and I can drop that in a week or so. But I’m 6 foot — it’s just not healthy.”

Ultimately, Bale modeled Trevor’s look after a picture of one of his idols in decline, Hank Williams. “There’s a shot of him where he looked very ill and emaciated. It was taken a couple of months before he died, when he was released from jail. I looked at that and thought it would be my ideal.”

Yet it’s an interesting mix of determination and pathos that led Bale not only to his transformation, but to the film, the character and the overwhelmingly bleak landscape.

“You kind of start to enjoy the feeling of being hungry or you at least convince yourself you do, anyway,” says Bale, who says the extreme dieting helped him delve into his character.

“It involved going into a great deal of solitude, a great deal of isolation, a minimum amount of exertion at all times. Literally, I would just think to myself night by night, just sit still. Don’t talk, do nothing. Just conserve. So you just end up mostly inside your own head and not really socializing. That’s really where Trevor found himself.”

And where Bale found himself, to a certain extent. The actor swore off dinners with friends, bars and socializing in general. “It’s not a very difficult thing to do for a few months. And I just kept on going and I was like, ‘Wow it’s really working!’ Then I got into a really zen-like state in my head. I had a lot of patience, a lack of nervousness, or anger, like nothing made me angry.”

It did, however, lead to a great deal of anxiousness on his wife Sibi’s part.

“I woke up a few times and she’d be quickly taking her hand away from my mouth because she was checking to see if I was still breathing,” says a rueful Bale. “So it wasn’t a happy time for her. However, the benefit was that I was so calm and serene as Trevor that it has become her favorite character that I’ve ever played. She loved being around Trevor.”

Bale’s wife had reason to be nervous. When the actor started putting weight back on for his next role as the masked superhero in “Batman Begins,” his health suffered. “My blood pressure went through the roof, my cholesterol went through the roof. I was waking up with heart palpitations,” he says.

Although Bale was handpicked to play Batman, his Bruce Wayne promises to be the darkest of the bunch. But, he says, the two films couldn’t be more different.

“I love the variety, but I would marry films like ‘The Machinist,’” he attests. “Doing movies like Batman is OK. I try out now and then. But the one I want to have around as my steady would be ‘The Machinist.’ I come from more of an independent-movies [background]. I like the feeling and the atmosphere. I also like the fact that you don’t have to answer so much to the dollar.”