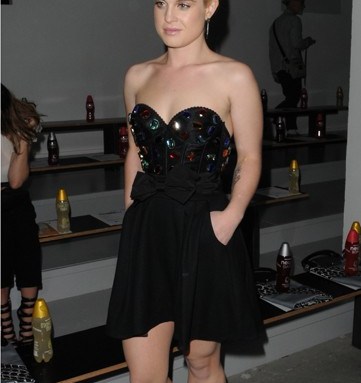 No ubiquitor worth her weight in party invites would be snapped in the same outfit twice. This trio of girls took things one step further, managing to squeeze in three different ensembles in less than 24 hours. Leigh Lezark kept to a body-conscious silhouette on a particularly frenzied day (she hit 17 events in total during the week), wearing Hervé Léger to the brand’s show, switching to Narciso Rodriguez for his front row and then back to a different Hervé Léger for a Style.com party. Neck-in-neck with Lezark at 17 hits, including closing Diane von Furstenberg’s spring 2011 collection, was French import Elisa Sednaoui, who wore a Rodarte frock at noon on Tuesday, was in an itty-bitty Yigal Azrouël look by 6 p.m. and quickly switched to a Michael Kors number right after for the premiere of “Never Let Me Go.” (Sednaoui was covering the shows for New York magazine, she said, but even Carine Roitfeld keeps it to one ensemble a day.) Nevertheless, it was Kelly Osbourne, clocking 11 appearances over the course of the week, who earned top honors. She went from strapless Jeremy Scott to tulle Marchesa to glittery Anna Sui in under five hours. That’s about the average time of a recreational female marathoner. Just saying.