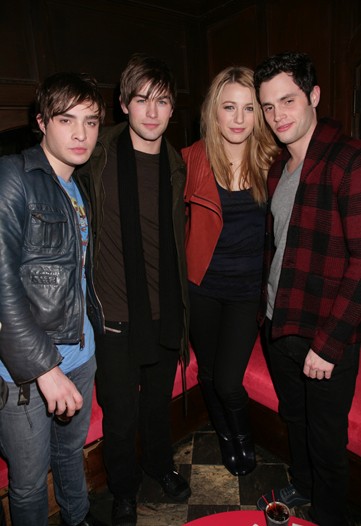 For celebrities, there’s perhaps no gig more plum than that of “party guest.” Just a few minutes spent posing at a step-and-repeat yields unlimited Champagne, a bag brimming with swag and, sometimes, a paycheck simply for showing up. The phenomenon might explain why, in this recession, some actresses seem to spend more time on the red carpet than on the film set. When a respected indie actress is at a launch party for a new cell phone, for example, chances are she isn’t going home empty-handed. But, hey, celebrities need cell phones, too.

And, really, who can begrudge them? Certainly not us.

In fact, we’d like to put the celebrate back in celebrity. So what if the cast of “Gossip Girl” seems like they’re competing for gold in a new version of the Celebrity Pro-Am Ironman Nightlife Decathlon? They’re spreading good cheer. Helping the economy. In the case of Brooke Shields, you might say she was simply trying to save her show and the jobs that depend on it.

Herewith, the Eye’s nominations for the year’s MVP (Most Visible Player).

THE CAST OF “GOSSIP GIRL”

*At least. Results were tallied from an unoffi cial Eye review of photo Web sites. In these celebs’ cases, additional appearances are likely.

BROOKE SHIELDS
As rumors abounded that her NBC show, “Lipstick Jungle,” would be canceled, Shields went on offense at parties around town.
Total: 24
Most unexpected appearance: Longchamp’s 60th anniversary party.

Next Ubiquitors: The Olsen Twins and Agyness Deyn>>

MARY-KATE AND ASHLEY OLSEN
While the sisters are no strangers to the party circuit, the former child stars were spotted flying solo more than ever this year.
Total: 30 (combined)
Mary-Kate: 16
Ashley: 10
Together: Four

AGYNESS DEYN
This eccentric model import is known as much for her carousing as her blonde locks and offbeat attire.
Total: 24

BECKI NEWTON
The “Ugly Betty” star is known for being perky, friendly and completely incapable of saying “no” to an invite.
Total: 34
Biggest p.r. gamble: The grand opening of Casino of the Wind at Mohegan Sun in Connecticut.

PEACHES GELDOF
The wild child of singer Bob has brought her Brit-bred stamina to the States.
Total: 31
Maybe not next year: The 70th anniversary of Bowlmor Lanes, hosted by Michael Phelps.

LUCY LIU
The star of the endangered “Dirty Sexy Money” kept working it even after taping ended.
Total: 24
Only worth it for a free apartment: Donald Trump and Nakheel fete the Trump International Hotel & Tower Dubai.

DIANE KRUGER & JOSHUA JACKSON
The actress might often go out solo, but she knows she’ll always have a plus-one for her main squeeze.
Total: 35 (combined)
Kruger: 28
Together: Seven

RIHANNA
The “Umbrella” chanteuse sings for her supper.
Total: 31
Oddest collaboration: The debut of her Totes Umbrella line at Macy’s (but it helped boost her single and she got her own umbrellas for rainy days).