Joey Gallo’s life and style are back in the spotlight with the release of a new biography, “The Mad Ones,” by Tom Folsom. 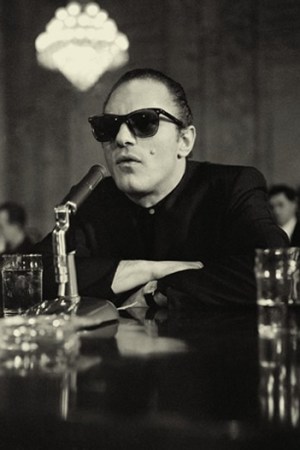 Mobster life — death, infidelity and betrayal — may not be everyone’s idea of aspirational, but with their sharp suits and slicked back hair, gangsters have been making the lifestyle look glamorous well before Martin Scorsese came along.

One of the first to draw attention for his fashion sense was Joey “Crazy Joe” Gallo, a hit man with the Colombo crime family who was tabloid fodder during the late Sixties and early Seventies until he was famously gunned down in 1972. At Gallo’s funeral, author Gay Talese told WWD, “He almost became one of the ‘Beautiful People.’ I went to a dinner party about a month ago in the home of Linda Janklow and all they did was talk about Gallo.”

Bob Dylan wrote about Gallo in his ballad “Joey” and Jimmy Breslin was inspired by the hit man for his comic novel “The Gang That Couldn’t Shoot Straight,” which became a movie starring Jerry Orbach.

Now Gallo’s life and style are back in the spotlight with the release of a new biography, “The Mad Ones,” by Tom Folsom. Harvey Weinstein has already optioned the story for a film and is hosting a party for the book Monday night at J. Crew’s SoHo men’s shop.

WWD caught up with Folsom to reflect on the Mafia man’s black suits and beatnik tendencies.

Tom Folsom: To me, this is a Sixties story that hasn’t been told in that light. While America was undergoing a counterculture revolution, so was the Mafia, and Joey was a prime mover in that. He was trying to escape the rules and codes of the Mafia — Brooklyn, family, tradition. He really fancied himself an artist and intellectual. He lived in the Village. He was into the Existentialists, Norman Mailer, jazz music and Wilhelm Reich, a forebear of the sexual revolution. He hung out with beatniks, talking about Marxism and revolution, and he decided to go out and live it. He took on the Establishment, which in his case was the Mafia. And there was a drug connection. Joey’s bodyguard, Ali Baba, was known as the guy to go to for the best pot in the Village.

WWD: Where did he get his fashion sense?

T.F.: He adopted a look from “Kiss of Death,” a film noir tale about a killer named Tommy Udo — which was a black suit, black shirt, white tie. You know the slow-motion walking shot in “Reservoir Dogs”? That was in the Tommy Udo tradition. That strut, that way of wearing your suit, is what I think gangster chic is. Joey wore a variation of this outfit when he went before Bobby Kennedy and the McClellan Committee on national television [in 1959]. People were fascinated to see real-life mobsters on TV. He took the Fifth the entire time, but he was wearing a pinky ring, sunglasses and a gold watch, and smoking a cigarette. He put on a show.

WWD: You wrote that when he got out of prison, he didn’t like the groovy fashion.

T.F.: His style was outdated because he’d missed the hippies. But then “The Godfather” comes out, and it changes the perception of gangsters from bumbling crooks to family men, living the American Dream on their own terms. That paves the way for Joey Gallo’s entrance into high society. He becomes friends with Jerry Orbach. He’s going to Elaine’s, to Sardi’s. Anyone who’s anyone wants to meet him. And you have to remember they were coming on the heels of radical chic. The Black Panthers were at Leonard Bernstein’s apartment. So you’ve got this acceptance of the social elite pushing the boundaries and accepting outlaws.

WWD: But gangster chic went downhill fast after he was murdered.

T.F.: Yes, because people realized they are gangsters and you can get killed.