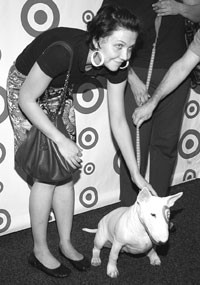 BROOKLYN, N.Y. — Though your average Target shopper might sport cargo shorts and flip-flops to troll the aisles for Twizzlers and Tonka trucks, at the opening party for the chain’s new Brooklyn store Wednesday night, Chloë Sevigny pushed her shopping cart in a tweed Chanel jacket. Her outfit didn’t seem out of place in an edgy, downtown crowd that included As Four and Dopo Yume, as well as folks sporting Heatherette, tweed Prada bags and, for Maggie Gyllenhaal (fielding questions about the breakup of her brother, Jake, and Kirsten Dunst), a Miu Miu skirt. Translation: These people obviously were not at Target to shop.

But with entertainment by a sword swallower and a snake charmer from Coney Island, not to mention Dr. Brown’s black cherry soda available at the beverage stations, this was Target’s attempt to attract the Williamsburg hipsters to Atlantic Avenue and keep them there.

“Ten dollars for two T-shirts?” asked a skeptical Gabi of As Four about a pair of gray Merona undershirts. “That’s pretty good.”

To be fair, Sevigny said that she’d visited a Target before, in western Massachusetts. On this evening, she spent some quality time in the lingerie department and extolled the virtues of the Shabby Chic selection. Her big purchase was a $10 beanbag chair. “No one likes the fancy chairs I have in my apartment,” Sevigny said. “And this one is so cheap, it’s disposable.” Still, one would doubt she’ll be making return trips to stock up on Sponge Bob Square Pants boxer shorts, Xhilaration jewelry or Swell dish towels, especially when she’s got the fashion world behind her. “These are Balenciaga boots,” she explained, pointing to her feet. “They keep sending me them.”

Speaking of boots, Sandra Bernhard, who did a little “Attention Shoppers” stand-up for the crowd, said she was going home with a pair by Isaac Mizrahi as well as a Michael Graves toilet bowl brush. She admitted she’s done her fair share of shopping at Target in California — she discovered the store maybe 10 years ago and has purchased everything from sweatpants and car seats there. “But I don’t think I’ll come to Brooklyn,” she sighed.