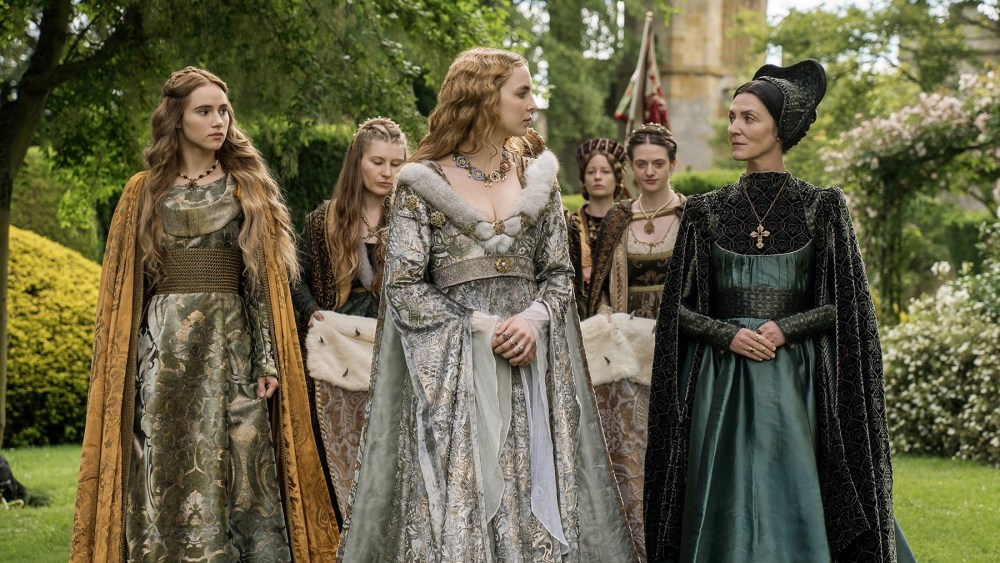 When developing the costumes for Starz’s limited-series period drama “The White Princess,” Phoebe de Gaye turned to paintings from the 15th century.

“It’s a chance to look at a period that’s so rarely done,” says the British costumer. “This is an interesting period, it’s very much a transition period. There are a lot of paintings of the period; the Flemish school. They put so much detail into some of their works that you can see where the seams are, you can see where long sleeves were pinned and unpinned so you could change it for different sleeves. I went through paintings and engravings and things, and read books on construction of the clothes of the period, and all that. Then, it was a matter of interpreting it for contemporary [viewers].”

The series is a continuation of the network’s “The White Queen,” and stars Jodie Foster as Elizabeth of York, Jacobs Collins-Levy as King Henry VII, along with Suki Waterhouse as Cecily of York. “Jacob, when he first came, I don’t think he’d worn costumes of this kind before, and he was very excited to put on the armor and whatnot,” de Gaye adds.

“The idea was to approach this in a slightly different way,” she explains of how this season differs; she hadn’t been involved with the previous series. “I was trying to make an authentic feel. The feel of authenticity, really, even though it’s a world that we’re inventing and learning from paintings and things. The idea was to make it a visceral, approachable world that drew the audience in.”

She describes the costumes in the show as “fairytale” and “theatrical.” The women’s dresses are made of rich colored brocades with fur and velvet trimming. They also have a presence — you can hear the ladies’ ground-grazing skirts rustle as they move.

While some items were sourced and rented, including jewelry, many of the costumes were created specifically for the show. “For our three queens as it were, we made all their costumes,” she says, adding that this allowed her team the ability to convey character development through dress. “The young queen, for example, sort of becomes more iron plated as her powers grow in the court. So she’s not actually wearing armor, but there’s the impression of protection against all of the pitfalls,” she says. “We used a lot of metallic, lacy textures that come in gradually. So she comes in as a young girl in these soft linen fabrics that are tightly laced but quite flowy, and they become stiffer with age.”

Of course, not all of the costumes mirror the functionality of the period.

“We had armors that were made from aluminum, but [the men of the time period] had armor that was made from steel, and the chain mail that they wore was unbelievably heavy,” de Gaye says. “You could just take a little bit and put it on the neck, and it weighs a ton. That they’re actually fighting in this stuff, it was absolutely incredible.”

Freida Pinto Takes a Stance in ‘Guerrilla’
Sienna Miller on Motherhood, Being ‘Shy and Weird,’ and Taking on Tennessee Williams
Gavin Rossdale on His New Clothing Line, Making Music and Being a ‘Soft Touch’ Dad
Michelle Branch: Back at Last