The actress and Peter Lindbergh teamed up again for Gerard Darel's latest ad campaign, which will be the French firm's first international one. 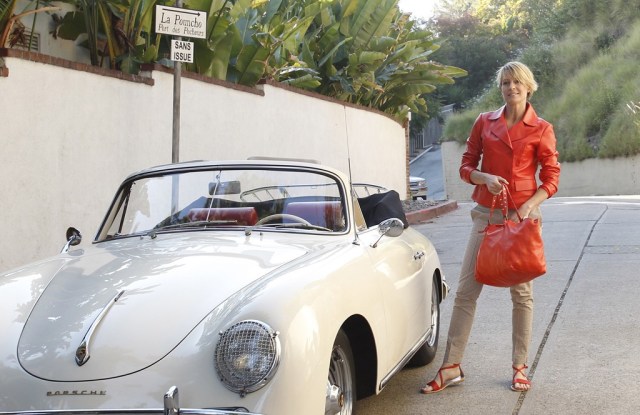 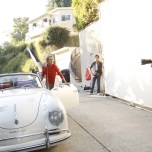 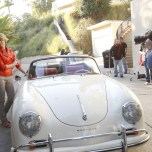 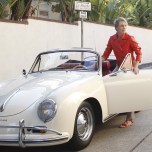 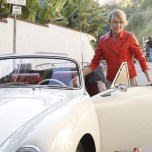 LOS ANGELES — It’s a typically sunny winter day in Los Angeles, where actress Robin Wright tilts her head back and closes her eyes to get into character while a small camera crew hovers nearby.

This story first appeared in the December 28, 2011 issue of WWD. Subscribe Today.

The team of Wright, Lindbergh and Lipman is a tight one; the agency has conceptualized five Darel campaigns since Wright signed on in 2010; Lindbergh has been shooting the ads since 1993.

“I hadn’t met Peter until I started working with Darel, but we absolutely fell in love with each other. I could work with him all day, every day,” said Wright.

Lindbergh is working intensely to shoot the five set-ups before the light fades, and has banished all but key crew from the poolside set, but it only takes Wright minutes to summon the expressions and poses he’s looking for.

The set, at Chateau Marmont, has been designed to resemble Saint-Tropez, with buckets of peonies, red and white striped backdrops and a vintage Porsche convertible. Lindbergh also directed a short film for the brand co-written and voiced by Wright about her own connection with France.

“There’s such a high level of trust between them, which means Robin gives so much during the shoots,” added Lipman between takes.

So while there’s an obvious comfort level on the shoot, the stakes have never been higher. Under new president Marianne Romestain, the 40-year-old company is poised to expand its retail reach outside of France, and has charged Lipman with branding it on an international level. The ads will break in March magazines including British Elle, Harper’s Bazaar, Vogue and Spanish Vogue.

“Marianne is pushing us further to connect with Robin emotionally,” Lipman added. “It’s less about the product and more about Robin. There are very few brands that respect women and want to give them clothes to make them look good at every age, and that concept is so exportable.”

Said Wright, 45, “I normally wouldn’t do this sort of thing, but I really feel like the brand is about individuality. It’s not like, ‘Here, wear this blazer and be this person.’ I wouldn’t be a good model for any designer’s idea of what fashion is. This is about letting your own personality come through.”

While she portrays a woman vacationing on the French Riviera, Wright is not necessarily acting. “I have always loved France. After I graduated [from high school] I got on a plane to Paris the next day and stayed for years,” said Wright, who modeled in Europe before becoming an actress. Today she’s one of the busiest women in Hollywood, currently garnering positive reviews as Daniel Craig’s editor-lover in “The Girl With the Dragon Tattoo,” which she called “a dream project.” She’s also heading to Australia next month to shoot “The Grandmothers” with Naomi Watts, based on a Doris Lessing short story about two childhood friends, both grandmothers, who fall for each other’s sons. “I know that sounds strange, but when you read the script, it makes perfect sense,” said Wright. “I’m always looking for different projects because I get bored easily.”

“This ad campaign doesn’t represent a revolution, as we are known for telling colorful, cinematic stories in our ads,” said Romestain, who came onboard in June after serving as managing director of the French division of Fast Retailing Co., where she oversaw the rapid overseas expansion of French contemporary brand Comptoir des Cotonniers. “But in order to retail outside of France we need to give people a clear message of who we are.”

At Darel, a company with annual sales of 200 million euros, or $260.7 million at current exchange, Romestain plans to increase business by 15 percent each year for the next five years, mostly by way of international expansion in the U.S., U.K., Spain and China.

The brand is currently sold through 300 directly operated stores and 1,200 multibrand retailers in more than 40 countries, including Bloomingdale’s. But high on Romestain’s list for 2012 are retail stores in New York and Los Angeles.

Romestain believes a French actress, or even a French set (the ads have also been shot in Malibu, Calif.), isn’t the key to getting Darel’s message across, but rather a woman like Wright — mother, actress and activist — whose attitude and lifestyle enhance the allure of the company’s offerings. Past models shot by Lindbergh for Darel have included American actress Mamie Gummer, Charlotte Gainsbourg, Stephanie Seymour, Brooke Shields and Nastassja Kinski.

Throughout her five wardrobe changes, ranging from a long aqua silk dress to a crisp white basque top and sleek pants paired with an orange Simple Bag, the company’s “It” accessory, Wright’s porcelain face conveys the bliss of a woman on holiday.

“Emotion is the direction ads are going,” Lipman noted, “and it’s time we pushed those boundaries again.”

Other firsts for the agency include the James Franco-written, directed and photographed ads and films for Seven For All Mankind and Hickey Freeman’s Francesco Carrozzini-directed docu-film featuring NHL player Sean Avery. Lipman described his firm’s latest creative efforts as “realism with a heartbeat.”