Aleksa Palladino is half of the up-and-coming duo Exitmusic, with her husband Devon Church. 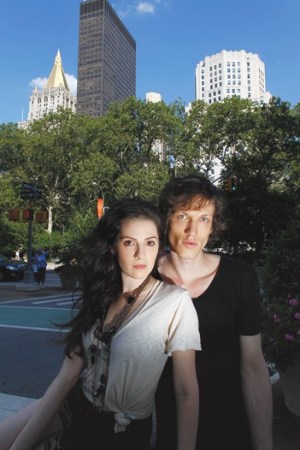 Sitting down for a chat with Aleksa Palladino, one can easily forget her role as Angela Darmody in HBO’s Prohibition-era series “Boardwalk Empire.” To start with, the petite brunette is wearing her long locks loose and untamed, a look rarely seen on her Bohemia-seeking character. And her ensemble of beaded tap shorts, worn T-shirt with a leopard bra peeking out and platform wedges is a far cry from Angela’s Twenties uniform of conservative blouses and ankle-grazing skirts. Furthermore, Palladino is eager to discuss not the second season of the buzzed-about period drama but her other career, as a musician, and her band, Exitmusic.

Music came before the screen for the 30-year-old Palladino, who started playing guitar at an early age before getting her first electric model at age 12.

“That really became all I did; I played every day and started writing music,” she says. “I’m still not sure how I started acting. I know I went on an audition and got it.”

At 14, she landed a role opposite 11-year-old Scarlett Johansson in the 1996 indie flick “Manny & Lo.” Over the next few years she continued writing music and acting, then met her future husband of six years, Devon Church, who makes up the other half of Exitmusic.

“We met on a train when we were 18 in Canada,” says Palladino. “I was traveling with my best friend; we had no destination.”

Church explains that he intended to visit a friend, but changed his plans after a train passenger gave him his unwanted ticket and he boarded Palladino’s train.

“She walked by me, and I followed her into the smoking car,” he recalls. He spent the next few days with Palladino in Toronto, but it was three years before the couple came into contact again. (“I answered a letter three years late,” Palladino admits.) A year later, Church, who taught himself to play guitar when he was 12, moved to New York from Canada to live with Palladino, and they started writing music.

“When Aleksa and I got back in touch, I kind of had the fantasy that something like this would happen,” says Church, who gave up dreams of writing novels or poetry for music.

Palladino, whose mother is an opera singer, grew up listening to groups like The Beatles and The Beach Boys, and in her teens became enamored of Nirvana. Church preferred hard-core bands. The duo took those inspirations, along with The Velvet Underground and Bob Dylan, to develop their own sound: a combination of haunting melodies and electronic sounds. They have a hard time explaining it.

“It’s really hard,” says Palladino, who adds that usually when asked about their music, “we kind of just mumble and make a beeline to the door.” The couple writes everything together and records on their home computer with both on guitar and keyboards, and plays a few shows a month (including one tonight at Pianos, on Manhattan’s Lower East Side), adding a drummer and keyboardist to the mix. They look forward to touring in support of their EP “From Silence,” out Oct. 4, and hope to gain the momentum they built while living in Los Angeles for a few years before moving back to New York two years ago after Palladino was cast in “Boardwalk.”

And thanks to her acting career, the band has been introduced to the fashion world. They were invited to perform at the after party for Cynthia Vincent’s New York City flagship opening event in March; Palladino happens to wear the brand often. Although she admits to still learning designer names, there are a few she has become fond of. But that doesn’t matter much when she’s dressing for shows. “I like to keep it simple,” she says, usually choosing to wear a pair of jeans with a T-shirt.

“I don’t want anything talking but the music,” she says.

With a month left of filming the series while also promoting Exitmusic, and the Emmy Awards in September, for which “Boardwalk Empire” was nominated for outstanding drama series, Palladino can expect a busy schedule. But it doesn’t seem to faze her, and there’s no sign of her losing focus on her music. As far as taking other roles, that’s something she’ll have to consider.

“Is this worth taking me away from saying something I’m writing to saying something someone else is writing?” she says she always asks herself about her acting career. “I think having music has kept me sane as an actor, a role I can write for myself basically.”