Chefs reveal their go-to potluck recipes to help spring out of the winter doldrums. 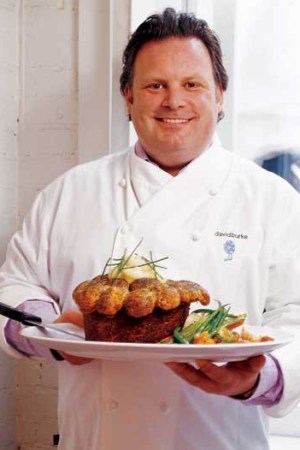 Chefs reveal their go-to potluck recipes to help spring out of the winter doldrums.

CHICAGO
David Burke of David Burke Primehouse says dumplings “are a great way to contribute an appetizer in a room full of entrees.”

Lay out six wontons at a time, brush sides with egg wash and place 1-2 tablespoons of either the chicken or shrimp mixture in the center. Stand skewer vertically in center of wrapper and pouch wrapper around it to form dumpling. Drop dumplings into a pot of boiling salted water and cook until they float (approximately four to six minutes). Drain and season with butter, salt and pepper.

Mince soybeans in a food processor. Put beans in a mixing bowl along with remaining ingredients, except oil. Roll into one-ounce balls. Half fill a medium saucepan with canola oil and heat to 375 degrees. Fry balls for approximately three minutes over medium heat until golden brown. Drain on paper towels and season again with salt and pepper.

Combine egg yolk, Dijon mustard, cilantro, garlic, lemon juice, tahini, salt, pepper and chili in food processor and blend on high for about one minute. Slowly add half the olive oil and then add all the water. Add the remaining oil and season to taste.

JACKSON HOLE, WYO.
Roger Freedman offers up Jambalaya a la ‘Q,’ which is on the menu at his Q Roadhouse.

SAN FRANCISCO
Mark Sullivan, head chef at San Francisco’s Spruce Restaurant, says, “Grilled pork is great both hot and cold.” Prepared according to this recipe, it can be served as an entree or in sandwiches.

Puree roasted garlic in a food processor, then whisk it with minced shallots, vinegar, salt, pepper and mustard. Drizzle in olive oil and finish with rosemary. Liberally brush marinade onto tenderloin and let sit for several hours or overnight in the refrigerator. Grill tenderloin over medium heat until slightly resilient to the touch (about seven to 10 minutes per side depending on thickness). Let sit for 15 minutes, then slice and serve.

LONDON
Andrew Michael Campbell, chef at The East Room in London’s Shoreditch, says fuss-free feta, pear and pomegranate salad is packed with super-foods for health-conscious guests. “It is quick to prepare, healthy and seasonal,” Campbell explains. “With blood orange and pomegranate included, it also works as an antioxidant. Guilt-free eating at its best.”

Crumble feta cheese into a bowl. Cut pears into four, lengthwise, remove the core and cut each piece in half. Remove peel from blood oranges and separate into segments. Trim the ends off a bulb of fennel, cut in half lengthwise and remove the woody core. Slice thinly. Remove the seeds of a pomegranate and put seeds in bowl with above ingredients. Add roughly chopped mint leaves and nuts. Dress the salad with moscatel or cider vinegar and olive oil. Season with milled black pepper and a little salt. Toss well and sprinkle with toasted poppy seeds.