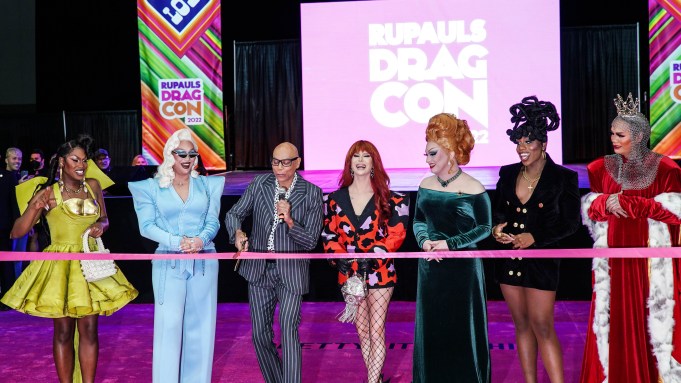 RuPaul’s DragCon made a splashy return to Los Angeles this past weekend, bringing high camp — and even higher hair — and countless colorful and bedazzled looks across the three-day celebration of the Emmy award-winning “RuPaul’s Drag Race” and its many International editions.

Historically drag has been relegated to gay bars and queer spaces, but at DragCon people of all ages could come and celebrate the art form. The event welcomed an all-ages crowd, and was firmly family friendly. There was even a kid zone with activations geared to the show’s youngest fans.

The in-person event was the first DragCon in the U.S. since the beginning of the pandemic. The event began in 2015 as an opportunity for fans of “RuPaul’s Drag Race” to come together and bond over their love and sometimes obsession with the VH1 competition show and uplift the art form that multiple iterations of the series have helped propel from a queer subculture to a cemented pop culture phenomenon.

The event was produced by drag icon RuPaul and production company World of Wonder and had an estimated 50,000 attendees, while 150 drag queens walked the floor of the Los Angeles Convention Center over the course of the weekend.

While the meet and greet booths with all the “Ru Girls” were the main draw, the convention floor also had a host of vendors and exhibitors that represented a cross section of the LGBTQ community, helping to generate buzz for queer creators.

The live event added a New York edition in 2017, followed by a United Kingdom outpost in 2020, but there hasn’t been an in-person event since 2020, and this past weekend proved the show’s obsessive fanbase is still chomping at the bit for more and more drag.

They Are Wearing Trends: Off the Streets, Onto the&nbsp;Runway