Blair, Serena and Little J were not in attendance, but their spirit was alive and well at the Metropolitan Museum's Apollo Circle Benefit Dance. 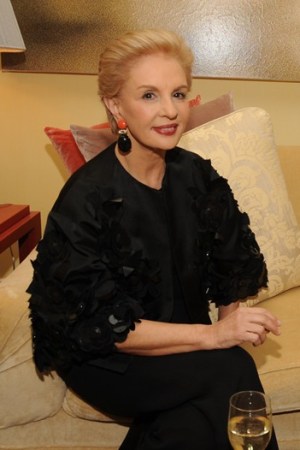 Blair, Serena and Little J were not in attendance but their spirit was alive and well Wednesday at the Metropolitan Museum’s Apollo Circle Benefit Dance, sponsored by Carolina Herrera. A slew of Gossip Girl-types descended upon the Temple of Dendur, transformed into a booming club complete with a DJ set by Paul Sevigny.

For some, the evening began at a pre-Apollo dinner hosted by Marjorie Gubelmann and Mario Grauso, where it was an even younger gentlemen who captured Carolina Herrera‘s attention: Gubelmann’s four-year-old son, Cyrus.

“No, you call me ‘Carolina Herrera,’ because we are friends,” instructed the designer.

“Mommy’s dress is so pretty,” he remarked.

“Marjorie, you always have the best food,” said Allison Sarofim as she and her tablemates cleaned their plates.

After coffee was served, Herrera quickly rallied the troops over to the Met, where Ivanka Trump, Elise Overland and Tantivy Bostwick (who had her own pre-party) were already holding down the fort.

Some of the dinner guests, however, couldn’t match the stamina of the Apollo Circle crowd.

“I have babies to nurse,” explained Lansing as she departed before the party’s midnight end time.

“And I’m nursing her,” joked Herrera as she accompanied her daughter out.

The next night, the superwealthy (and the just regular wealthy too) gathered to fete Graff’s new Madison Avenue store. Edythe and Eli Broad, Julia Koch and Stephanie Seymour joined Laurence Graff to check out the Peter Marino-designed boutique and gawk at the jewels, including a 100-carat D-flawless diamond called “The Flame.”