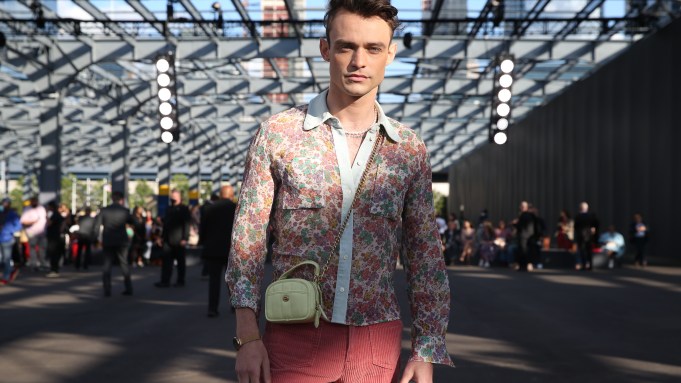 First comes the hit TV show, then come the fashion week invites — it’s just the laws of nature. This New York Fashion Week has belonged to the “Gossip Girl” reboot kids, who have been everywhere from front rows for Thom Browne and Coach to parties for Saks and Dior. Friday evening at Coach, dressed in cropped faded red trousers, a lacy blouse and a pearl necklace, the series’ resident bad boy (2021’s Chuck Bass) Thomas Doherty was in attendance, taking in the action.

The 26-year-old Scottish actor said this is his first proper fashion week — he did “a couple shows a few years ago,” but this is definitely his debut.

“It’s been fun, it’s been really cool. All the clothes are so sick,” he said. “I’m really into these Moschino leather gloves — they were beautiful. Mo-skee-no, is that how you say it?” (Yes).

“It’s been great to meet all these designers and all these creative people. It’s been really really nice,” he continued. “The city definitely has come alive.”

The “Gossip Girl” cast has been all over Deux Moi’s sightings since the show premiered this summer, and Doherty said he definitely gets recognized from time to time while out.

“The demographic is, like, 17- to 25-year-old girls. But sometimes I get boyfriends who come up and are like ‘my girlfriend watches the show,’” he said.

With the show’s renewal for a second season, he’ll be taking some NYFW inspiration when it comes to his character Max’s wardrobe.

“Honestly I feel like it would be amazing if he could wear a lot more….I don’t know what the terminology would be, but a lot more kind of feminine clothes. And there have been some really beautiful pieces [this week] that are ambiguous gender-wise,” he said. “That’s why I love what I do, you get to play characters and wear this and speak this way, it’s really awesome.”

His outfit may have given it away, but his style icon is none other than Harry Styles. “Him and David Bowie, his ’80s looks,” Doherty said. “I think it’s fun to dress up. In my every day I’m very low-key, but this is a great opportunity to wear beautiful clothes.”