Through The Lens With Jonathan Becker

The longtime Vanity Fair contributor has stories for days and a new book on the horizon. 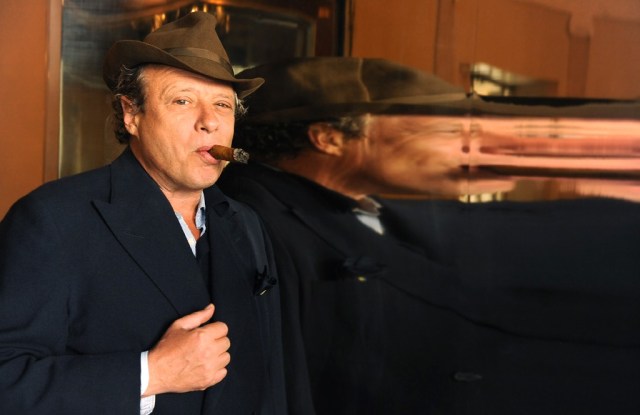 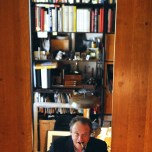 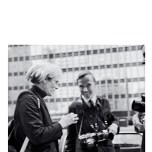 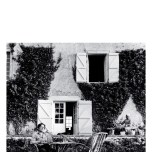 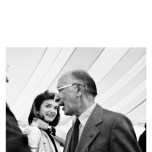 “Don’t shoot too wide. Go over there and use a longer lens.”

Jonathan Becker directs others without hesitation or the facade of gentle suggestion. It’s an unseasonably warm fall afternoon, and the photographer is standing in his studio on Manhattan’s Upper East Side, a gem of midcentury modernity, mugging for his own portrait. Becker leans with a deliberate nonchalance between two sliding white oak doors, the entrance to his office, while sucking on the soggy tip of his cigar nub.

This story first appeared in the November 21, 2012 issue of WWD. Subscribe Today.

“Do I look all right?” he asks through a hazy cloud of smoke as a WWD photographer snaps away. “I look terrible, don’t I?”

As one of Vanity Fair’s lead photographers for the past three decades, Becker isn’t accustomed to the role reversal. Being on the other side of the lens is more his thing. Becker’s portraits of director Louis Malle and Brassaï, Becker’s mentor — or, as he terms it, “the saving grace of my life” (more on that later) — were featured in the pages of the prototype for the magazine’s revival in 1982. Essentially, he’s been with Vanity Fair since its genesis. Over the course of his lengthy tenure, Becker’s been hurled far and wide on assignment, from Buckingham Palace, where he shot the first photographs of Prince Charles and Camilla Parker Bowles together, to a remote tract of the Amazonian jungle to chronicle life of a Yanomami tribe, his very first assignment for the magazine. “We took a four-person plane but put six people in it, packed it to the gills. When the tribe saw us approaching, they started coming out with their bows and arrows and spears toward the runway. I remember thinking, Yeah, I’m going to die.”

Becker has compiled the visual vestiges of his long, strange trip into a book, “Jonathan Becker: 30 Years at Vanity Fair,” to be released next month by Assouline. The breadth of his work is demonstrated by the range of his subjects, with photographs of both André Leon Talley and Dr. Jack Kevorkian making the cut. His pre-Vanity Fair days are just as colorful as his on-assignment ones. Becker grew up in New York, leaving at 20 to go apprentice for the esteemed Brassaï in Paris, where he made his living hustling naïve Parisians at late-night games of backgammon.

“You have to lose the first three games,” Becker says, plopped down on a leather couch in his studio. “And you have to pick the right people to play. At one in the morning, that’s not that hard. If you’re ready and well-slept and they’re half in their cups, it makes it pretty easy.”

Soon after he arrived, Becker got hired by Gerry Dryansky to snap party pictures for WWD’s Paris bureau.

“This sounds bad, but I was 20-years-old and didn’t know what Women’s Wear Daily was,” he says. “It sounded like the name of a women’s underwear company to me, so I told Gerry he couldn’t use my name, to use my middle name instead. If you go back in the archives, all my work for Women’s Wear is under Jonathan Heath.…Gerry hated me after that — what an arrogant little prick I was.”

The arrogant little prick ended up returning to New York, where he drove a cab, often picking up intriguing characters: Diana Vreeland outside the Beekman Theatre after a movie; Andy Warhol after a few of his famed Studio 54 outings. “Andy would always come sit shotgun because he was afraid of taxi drivers,” Becker laughs. “He was so cheap, never tipped.”

Becker is a masterful raconteur. A voluble speaker, he is utterly off the cuff, without a shred of pretense or agenda. He’s discursive, meandering from one story to the next, each tale equally fascinating (frustratingly so, as Becker rarely finishes them). Today, his anecdotes range from the droll (bartering with the Yanomami chief with a flashlight, a hot commodity to the tribe) to the more grisly (shooting Kevorkian at his home and discussing the doctor’s infatuation with corpses). Oddly enough, Becker developed an unlikely fondness for Kevorkian, viewing him as something of a muse.

Though Kevorkian’s disturbing magnetism certainly stirred something in Becker, no one impelled Becker quite like Brassaï.

“He’s my great hero,” the photographer says. A shot Becker took of Brassaï the very first day they met is in the book.

“I remember Brassaï was upstairs with some big collector and his wife answered the door and said, ‘Go right up.’ I see him on this sofa with the collector. There were all these prints — beautiful, beautiful prints — scattered all over the floor,” Becker recalls of the day he met the then 75-year-old in November of 1974. “He had these big slippers he’d wear all the time, and at one point, he just got up to go to the bathroom and walked right across the prints. Crunch, crunch, crunch. The collector gasped, but Brassaï was like that. He didn’t care. He had a wicked sense of humor. He was very naughty, very childlike.”

The impact his mentor made on Becker is clear. Throughout the interview, he pulls out Brassaï images to illustrate his penchant for surrealism. “Brassaï found the surreal in the real. This scene seems so dreamlike to me,” Becker says, flipping through “The Secret Paris of the ’30s” to an image of a couple embracing, a mirror image of the backs of their heads echoing behind them. “It’s like electric.”

Another thing Brassaï instilled in him? Efficiency. Becker is known for his photographic alacrity, with shoots spanning a fraction of the time one would anticipate. A stalwart eschewer of digital, Becker relies on his trusty Rolleiflex, which only gets 24 takes before the roll is up.

“Brassaï taught me that. He never took more than one or two frames,” Becker says. “When you’re good, you don’t need to.”