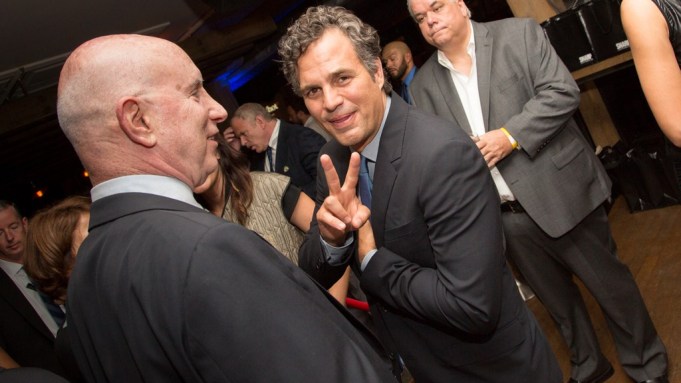 “It’s very nice being back here,” said director Bennett Miller, who first attended the festival in 1998 to promote his documentary “The Cruise.” “[I have] never had anything less than very special experiences here,” he told the crowd before introducing the cast, beginning with Vanessa Redgrave. “It was a terrifying pleasure working with you,” he said, and then drew laughs when he introduced Mark Ruffalo as an up-and-comer. “Not many of you have heard of him, but you will be hearing of him in the future. He’s just getting his start.”

He took a good-natured shot at Channing Tatum, too, describing him as “another newcomer dancer turned actor,” a reference to the actor’s role in “Magic Mike.” And finally, “a fellow named Steve Carell,” who, with the help of a prosthetic nose, bad haircut and layers of aging makeup, creepily transformed himself into drug-sniffing millionaire John du Pont.

“Everyone seems so nice and well-dressed and clean, but everybody got banged around pretty good on this movie,” Miller noted of the dark tale based on the life of Olympic wrestling brothers, Dave and Mark Schultz, played by Ruffalo and Tatum, respectively. “It’s been a long, hard road with this movie, and I could not be more proud of it.”

Afterward, Carell, Ruffalo and pal Catherine Keener — in town to promote the psychological thriller “Elephant Song” — slipped into a corner booth at local eatery The Citizen. Fans crowded near the table, with one overzealous admirer infiltrating security to ask Keener for a photo. “I have food in my teeth,” the actress said, before obliging. The fan’s good fortune soon ended, as security booted her from the bash, and subsequently beefed up protection around the perimeter of the table for the rest of the night.