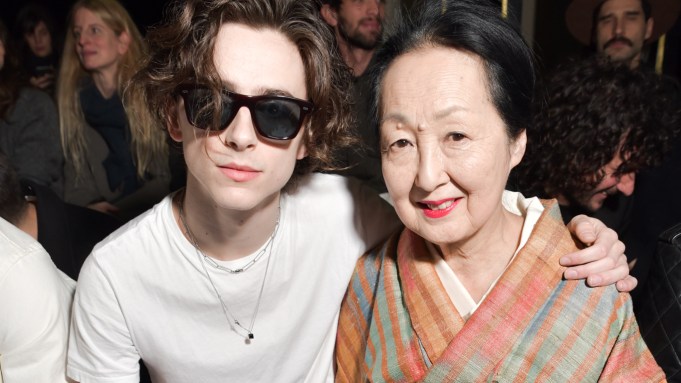 TIMMY IN PARIS: Timothée Chalamet is known for his daring red-carpet looks: He’s been spotted in a Louis Vuitton men’s harness; a fuchsia Stella McCartney three-piece suit and a pearl gray number with a satin waistband by Haider Ackermann.

But the “Call Me By Your Name” star turned up in a simple T-shirt and jeans at Ackermann’s fashion show, held on Saturday at the Théâtre National de Chaillot in Paris. He also sported a backpack — which clearly wasn’t just for style as it looked pretty full — as well as a pair of dark sunglasses, the only visible indication of his star status.

Architect Peter Marino rattled off his long list of projects: The opening of La Samaritaine; the renovation of two Christian Dior stores, one being the flagship on the Avenue Montaigne; two new Chanel stores and the refurbishment of the Louis Vuitton flagship on the Champs-Elysées.

“I take pills,” he shrugged. After a pause he corrected: “Good pills! I take Vitamin B supplements.

Delfina Delettrez shared her own tip to make it through fashion week without losing too much energy: “Leave before the end,” she laughed, adding that she is planning to join her family for a vacation in the Italian mountains on Monday.

The jewelry designer, who is currently presenting her new collection to press and buyers in Paris, was sporting green eyeliner under her eyes, her signature look.

“I have always wanted to have green eyes, so this is my way of faking it,” she explained. “Sometimes I switch to blue, because my three kids have blue eyes.”