VIPs gathered at the residence of Charles Rivkin, US ambassador to France to congratulate Lauren on being decorated as a Chevalier of the Legion of Honor. 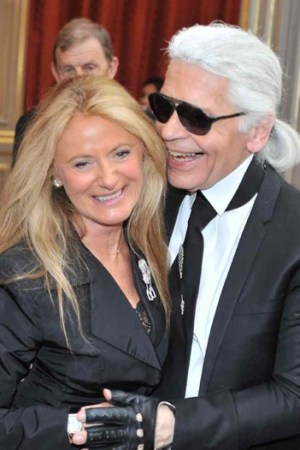 TALL ORDER: Everybody needs someone to look up to. On Thursday night in Paris, it was Ralph Lauren gazing up at Hubert de Givenchy, among VIPs who gathered at the residence of Charles Rivkin, US ambassador to France, to congratulate Lauren on being decorated as a Chevalier of the Legion of Honor by President Nicolas Sarkozy.

“I had a stiff neck looking up so high,” Lauren quipped about the stately retired couturier. “I admire his taste.”

This story first appeared in the April 19, 2010 issue of WWD. Subscribe Today.

Lauren brought his own cinematic decorating touches to the opulent 19th century mansion, filling it with 2,500 crimson roses so fragrant and velvety Lauren Bush was tempted to rest her head on one bouquet.

Alber Elbaz was just back from a 24-hour jaunt to New York, where he shot Lanvin’s fall-winter campaign with Steven Meisel and models Anja Rubik, Magdelena Frackowiak and Mariacarla Boscono.