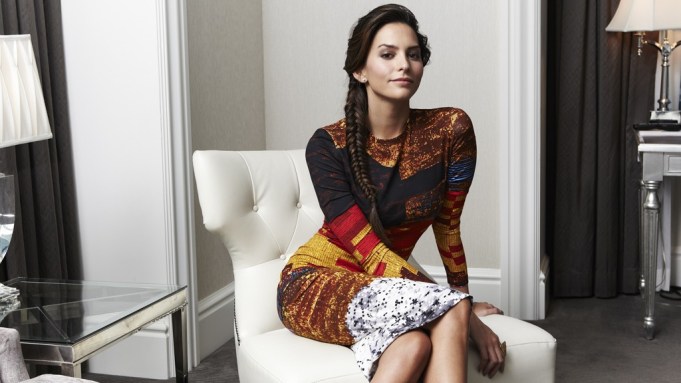 WWD talked to four more of this year’s breakout stars at the Toronto Film Festival, which closed Sunday.

Genesis Rodriguez has the perfect tag line to sum up her latest career turn: “From telenovelas to Toronto,” cracked the Givenchy-clad actress during a chat at the Trump International Hotel and Tower Toronto. The daughter of Venezuelan singer and actor José Luis Rodríguez (affectionately called “El Puma”) and Cuban model Carolina Pérez, the former soap actress is starring in “Tusk,” the first film of Kevin Smith’s upcoming “True North trilogy.”

Big Break: She auditioned for a role in “Casa de mi Padre,” a spoof of telenovelas starring “the coolest, sweetest, nicest guy possible,” Will Ferrell. “I mean, could it have gotten any better for me?” she said. “I just gave them super telenovela and I got the job within the week.”

Father’s Daughter: “I never saw my dad say, ‘No,’ to an autograph or picture in my 27 years,” said Rodríguez, who split her time between Miami and Venezuela growing up. “It’s the greatest inspiration. He’s 71 and still working.”

Up Next: Smith expanded her role in “Tusk” during shooting with an additional 14 pages of dialogue. He then cast her in the Canadian-themed “Yoga Hosers” alongside Johnny Depp, and in “Moose Jaws.”

Alba Rohrwacher arrived at the festival with a serious case of jet lag. But it was all for good reason: She had traveled here from the Venice International Film Festival, where she picked up the Best Actress Volpi Cup for her work on “Hungry Hearts,” a dark drama shot in New York alongside Adam Driver, who was also awarded the festival’s top acting prize. “The movie’s all about two actors so, of course, we were so happy,” said the German-Italian actress.

Big Break: In 2007 and 2008, she won back-to-back David di Donatello awards (the Italian Oscars) for “Days and Clouds” and “Giovanna’s Father.” She then gained traction Stateside with her role in “I Am Love.”

All About Adam: “For me, he was like the most incredible partner I’ve ever had. We met just one month before the shooting started, and then we had only one reading of the script, but everything is easy with him,” she said of working with Driver.

Up Next: She will appear alongside Salma Hayek in “A Tale of Tales,” a film about a circus family.

Jake Abel booked a last-minute ticket to Toronto and ended up crashing on a friend’s couch to promote two films at the festival: Andrew Niccol’s “Good Kill,” in which he plays a drone pilot alongside Ethan Hawke and Zoë Kravitz, and “Love & Mercy,” a Beach Boys biopic in which he plays Mike Love. It’s all part of the ride for the former model, who drove out West in pursuit of the Hollywood dream while still in his teens.

Big Break: After roles in young adult fare like “Supernatural” and “Percy Jackson and the Olympians: The Lightning Thief,” he landed a high-profile part in Stephenie Meyer’s “The Host.” “When we were on the press tour for ‘The Host,’ we did a signing at The Grove [a shopping center in Los Angeles] and there’s security guys in suits and it’s mayhem. And then two months later, I’m back there walking around with my wife and it occurred to me: Nobody cares,” he said.

Off the Mark: During a fight scene in “The Lovely Bones,” Abel missed his mark — by a lot. “By mistake, I punched Mark Wahlberg,” he said. “It probably felt like a tickle to him.”

Up Next: “Ghosts of the Pacific,” a World War II drama based on a true story about three men trying to survive on a lifeboat with no food or water: “I lost 17 pounds in two-and-a-half weeks.”

Golshifteh Farahani didn’t make it to Toronto due to her busy filming schedule, but she called from Café de Flore in Paris to discuss her roles in two films that premiered at the festival: Jon Stewart’s directorial debut, “Rosewater,” and Mia Hansen-Løve’s “Eden.” Stewart’s film, based on the true story of journalist Maziar Bahari’s five-month imprisonment in Iran after his appearance on “The Daily Show,” struck a chord with the actress, who lives in exile from her native Iran in Paris. “I thought it was important to be in it,” she said of landing the part of Bahari’s older sister. “I can’t go back. But Iran is part of me.”

Big Break: In Iran, her role in “M Is for Mother” was her breakout. But with “Body of Lies,” she gained a worldwide audience. “Because of that movie, I’m living my life in exile, but I’m also gaining the world.”

Role Reversal: Her role in “Rosewater” was intended for a 50-year-old, but she convinced Stewart she was the right woman for the job. “I know Maziar, and I know his story,” she said.

Up Next: Farahani plays Nefertari, a Queen of Egypt, in Scott’s “Exodus: Gods and Kings.” “Ridley Scott is like my godfather in cinema.”