Never one to take a let's-see-how-it-goes approach to business, Todd Oldham said that everything he does with Kid Made Modern is purposeful and rooted in the five tenants of learning. 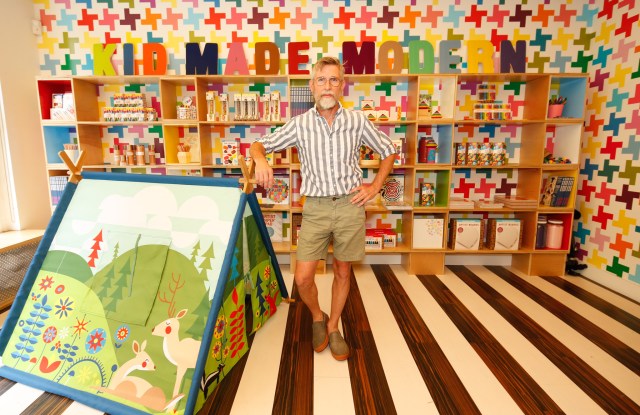 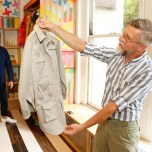 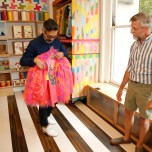 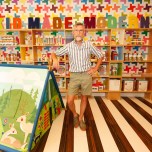 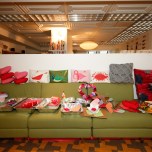 NEW YORK — Highly crafted children’s wear for Kid Made Modern is one of the numerous projects Todd Oldham’s team is polishing up in his Vesey Street design studio here.

What used to be a law office is now a warren of colorful library-like rooms with eclectic art and soft-spoken staffers juggling a bevy of projects. In the nine years since he exited SoHo for lower Manhattan, Oldham and his team have had a bird’s eye view of the rise of Santiago Calatrava’s Oculus transportation hub and the neighborhood’s revival. During a Thursday morning interview, the multidisciplinarian and his business partner Anthony Longoria ran through their numerous new pursuits. As is often the case in Oldham’s way of working, he discovered the artist Patrick Hruby, who created the intricate placement prints for the Kids Made Modern A-line dresses by accident. While reviewing portfolios, as he likes to do after book signings, Oldham first met Hruby.

Another hint of the interconnectedness can be found in an elaborate animal print similar to the cardboard sculpture KMM one that children can color. Retailing from $280 to north of $600, the dresses feature some of the signature sequins and beading that Oldham once dressed models like Naomi Campbell in. The embroidered dresses and separates will be sold initially via Nordstrom, KMM and specialty store Forty Five Ten in Dallas. With the debut 20-piece children’s wear squared away, Oldham and his team are exploring offering friendlier price points for spring.

For a pop-up that is planned for the Dallas specialty store this fall, Hruby created a print of the Dallas skyline that includes the state fair’s iconic “Big Tex,” as well as the Lone Star state’s flower and state bird on the interior of the dress. Praising two associates, Nora MacLeod and Derya Altan, Oldham said, “Everything is hand-built. We need actual makers not just designers. We’re an unusual design studio because we have people from all different facets. It’s really an art first community. There’s a lot of stuff in the world — we’re not trying to duplicate other ideas. We’re trying to make things so singular.”

Through a five-year association with KMM, Oldham’s design team has created 60-plus arty items, but apparel is a new venture. A long-sleeve French bateau-style T-shirt is imprinted with the names of the 20-plus different colors on one sleeve. To learn about design basics, a dress looks pattern-like with references like crewneck, button-down, Peter Pan collar, Empire waist and cropped waist. “It’s kind of dense with information but why not?” Oldham said. “We always like to give you all the information and let you figure out what it means to you.” The girls’ line has a faux-fur coat cut upside down so that the wearer will look more like a Muppet.

For KMM’s first New York event this fall, the team is toying with creating a 100-foot mural that can be painted on both sides and later cut up and sewn into pillows that could then be sold to benefit a charity. “I want to show the possibilities of how ideas can manifest into a life,” Oldham explained.

On another front, he and the writer Sloane Crosley are working on a book that will be an offshoot of “Sad Stuff on the Street,” a site she started four years ago that featured random images like an abandoned teddy bear or pregnancy test photographed on the sidewalk. The images, which were taken all over the world, are being compiled for a book that will benefit The National Alliance of Mental Health. Oldham, who has published 32 books on subjects such as Joan Jett, children’s illustrator Ed Emberley and the artist Wayne White, is also working on one about the artist Tim Biskup. In charge of licensing for the estate of Charley Harper, whom Oldham befriended later in the artist’s life, Oldham’s studio is developing furniture and home decor for West Elm. “This wasn’t a master plan. It just happened and is taking off,” Longoria said.

Consistently approached for advice by designers and lots of students, Oldham doles out information about his autodidact, trial-by-fire experience. “I’m happy to share where I got my butt singed and how you might not have to. It’s really good information,” he said. “When I stopped, I stopped. I knew a year before. I was one of the few designers who got to wave good-bye as opposed to getting my face ground in the gravel.”

“We were so lucky — Gianni [Versace], [Giorgio] Armani, Azzedine [Alaïa] and [Christian] Lacroix all told other people, ‘You should go see this guy.’ And they did. They were so generous and kind. I still can’t believe they did. Those guys are geniuses, incredibly gifted and had nothing to prove so I guess that’s where you can be genuinely generous. But they changed things for me. I had a good version of fashion for sure. I’m glad I got to do it then. It seems like it’s a very different arena now.”

Although he has zero interest in returning to fashion, he keeps up with a few favorites. “I think what Viktor and Rolf does is astonishing, and John Galliano. I think Marc Jacobs is just a treasure. Anna Sui is a sweetheart,” Oldham said. Opening Ceremony’s Humberto Leon and Carol Lim will extend their support of KMM, and Colette has shown interest in the craft collection.

The former host of MTV’s “House of Style” has been developing many stop-motion videos with his team that will be out in the fall. “Everything is alive. We’re not attached to other people’s timeframes and systems. We just kind of do what we want, which works great. You don’t have to. That’s what’s nice about the world now.”

“All of Everything: Todd Oldham,” the retrospective that was held at RISD last year, will have a second installment at the Wexner Center for the Arts next spring. Glimpses of Oldham will be featured in the new documentary “Larger Than Life: The Kevyn Aucoin Story.” Walking beneath a framed film leader from John Waters, Oldham said that is one of five pieces that he will loan for the filmmaker’s upcoming exhibition at the Baltimore Museum of Art next fall. Creating a show for his hundreds of Lucia Stern textiles, soft sculptures, collage and embroidered paper is also on his check list. “She was very close to the Guggenheims but other than that her work just disappeared,” said Longoria, adding that Oldham first unearthed some at the Melrose Swap Meet.

Passing by a quartet of an Ellen Berkenblit painting that inspired his fashion line’s crown logo, he recalled cutting the first one from electrical tape. Oldham said of the emblem, “If you look at it, the points are off. It made me laugh because it seemed like such an official symbol and we were so goofy. One of the biggest things to learn as a creative is to not question. Instincts are fine and they are worth acting on once you get your things in order. You may not know where it’s going but it’s worth exploring,” he said.