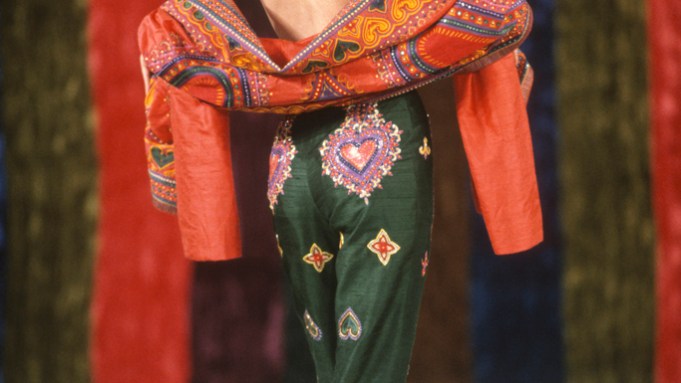 Todd Oldham has no intentions of diving back into the fashion industry, but the multidisciplinary designer is having a fashion moment just the same.

The Rhode Island School of Design will stage the first solo exhibition dedicated to his work with “All of Everything Todd Oldham” debuting at its museum April 8. Oldham, who taught a textiles design class at the school earlier this year, also recently donated “a good chunk” of his archives to the school. (The Metropolitan Museum of Art pretty much has the rest of it.) In a new twist, RISD agreed to his suggestion that he restyle much of what will be on view in Providence.

To prepare for the 60-ensemble exhibition, Oldham pretty much had to empty out his New Mexico storage facility, which was no Saturday afternoon task. “I never had a sample sale. I had the very strange circumstances of having everything. I had every shoe, hat, glove – everything – and often in multiples. It was kind of insane. My entire office was completely erupting for about a week,” Oldham said.

But the designer wasn’t awash with nostalgia after seeing all of those creations that were once worn on the runway by Cindy Crawford, Christy Turlington, Naomi Campbell and other favorites. “I had a supergreat time doing fashion. When I was done, I was done. But it’s been nice to go back and look at some of it.

“I have always enjoyed what I do. But for me, designing a dress is like designing a hotel or a chair.”

Arriving on the fashion scene in 1989, Oldham quickly gained attention for such involved constructions such as a Pantone nonrepeating print design, or Swarovski crystal-encrusted and embroidered motifs applied by a 400-year-old workshop in India. Years before other designers started collaborating with chain stores, Oldham first teamed up with Target in 2002. He also took to TV ahead of the pack, hosting “Todd Time” on MTV’s “House of Style” in the Nineties.

At the end of last year, Oldham published his 21st and 22nd books simultaneously. “I would suggest not doing that,” he said dryly of the doubleheader. “Ed Emberley” is about the Caldecott Medal-winning children’s book illustrator and writer of the same name, and the other is “Strange Stories: The Photography of Gerald Davis” (both titles were published by Ammo Books). Oldham said of the latter, “That was so exciting. Gerald Davis was completely ‘un-Googleable’ because he stopped working when digital set in. His family kept everything, after he dropped dead walking home from a job. Thirty years later it was all there. It was on 35-mm slides that were often developed in supermarket [film centers] so it took a while to get them back in good order.”

Aside from a stint as the photo editor of The National Enquirer, Davis shot for European tabloids, as well as stock photography, Palm Beach socialites and a bevy of other subjects. “He had the most amazing trajectory. There would be a 40-page story on Julio Inglesias, a stock photo of an African grey parrot and shots of Palm Beach socialites, which were really subversive.”

One of his other books, “Kid Made Modern” (Ammo Books), evolved into a line of gender-neutral art-based craft supplies and kits sold in sustainable packaging through an exclusive deal with Target. Now the line includes apps and other digital components, and Oldham has the green light to sell Kid Made Modern to other retailers worldwide as of September. With the first Kid Made Modern craft studio and concept shop to open in Chicago’s Land of Nod next year, plans are in place to open freestanding stores down the road, Oldham said.

His 23rd book, “Queer Threads: Crafting Identity and Community,” will be released later this year. It builds on the 30-artist exhibition staged at the Leslie-Lohman Museum of Gay and Lesbian Art last year. Having designed costumes for such films as “Strangers with Candy,” the designer is close to finishing his first yet-to-be-revealed screenplay, which is about “what it means to win and how winning means different things to different people.”

But back to the upcoming exhibition at RISD, where Oldham picked up an honorary doctorate last year. “I barely graduated high school, so it is not lost on me to be a doctorate of arts and sciences. I am superhonored [about the exhibition] by a school that has spent so many years nurturing their students’ creativity. That is just so potent.”