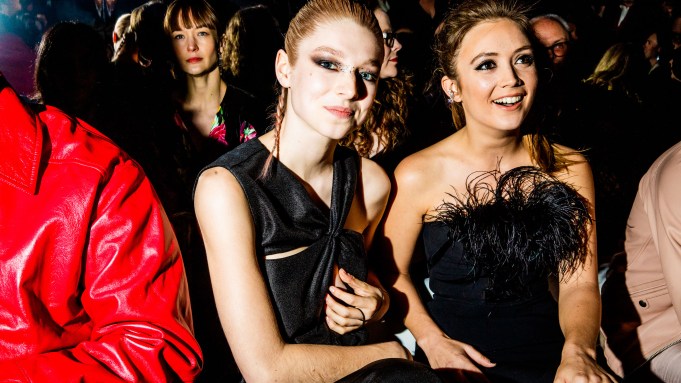 “Is that Kylie Cosmetics?” Kylie Jenner was teased as she applied lip liner upon arriving at Milk Studios on Friday night. “Whassup?” she purred in response, clad in a Tom Ford minidress.

Sitting front row, Renee Zellweger shared warm embraces with Jennifer Lopez, who was with Alex Rodriguez on the heels of her Super Bowl halftime show. Demi Moore, who reunited with fellow Brat Packer Rob Lowe, arrived with daughter Rumer Willis, while Miley Cyrus — in a low-cut black ensemble and mullet hairstyle — came with brother Trace. When he took his phone out to film himself and his sister, as Miley does, she was quick to stick out her tongue and flip off the camera.

In the world of music, there was Ciara, who showed off her baby bump; Lil Nas X; Dr. Dre; rapper 21 Savage, and K-pop stars Tiffany Young and CL. Model Rosie Huntington-Whiteley was with Jason Statham, while Liberty Ross had Jimmy Iovine by her side. The surprise of the night was Jeff Bezos turning heads with girlfriend Lauren Sanchez.

“It’s nice to have a fashion show in L.A.,” said Lisa Bonet alongside Jason Momoa. Her last one in Tinseltown was back in 2016 for Hedi Slimane’s last hurrah at Saint Laurent.

“What would you call this?” said Jon Hamm of his eye-catching blue suit. “I don’t know. It’s a silky something.” The actor sported a turtleneck with his look. “Tom Ford everything — well, except these,” he added looking down at his white sneakers. “They’re Converse. I talked them into letting me wear them.”