“I remember it like it was yesterday,” said Zoe, recounting her first big break. “Tommy called me into his office, because I was working with Andy, his brother, who’s amazing as well.”

Tommy Hilfiger, that is, who was sitting front row and center in the audience in support of his wife, Ocleppo. Zoe continued, “And Tommy said, ‘I have this really big ad campaign that I’m working on, and it’s with all these young actors’…Peter Arnell was directing it. He said, ‘I think you can do this,’ and I was like, ‘Seriously?’ I had no confidence in myself. I was so young and terrified.”

It was a two-week job.

Zoe, who recently collaborated with footwear brand and retailer Aldo, said she was eternally grateful for the opportunity: “People giving you that chance, when you’re nowhere near deserving of that chance, is a really big deal.”

“Well, I think you were deserving,” Ocleppo said. “I would have to say that one of my husband’s strongest abilities.…He sees talent, and he believes in people before they believe in themselves. He’s always been on the forefront of fostering young and upcoming talent. I don’t know how he does that. How do you do that anyway?” she added, turning to him.

He could tell by the way Zoe was dressed that she knew what she was doing, said Hilfiger to laughter from the audience.

The women proceeded to discuss highlights in their respective careers and current changes in the fashion industry.

“With Barneys [New York] closing down and Zac Posen, there’s such a shift,” Ocleppo said. “I flew in from New York this morning and looked around on the plane, and everybody was in jeans, T-shirts, sneakers or a hoodie. What does that mean to the fashion business?”

“The front row of fashion shows looks like that now,” Zoe added. “It’s one of the most challenging times in the industry….As long as I’ve been in fashion, my whole adult life at this point, I have seen more changes in the last five years, even more than 15 years. I’ve never seen such a shift in the industry in such a dramatic way and rapid…social media came, changed everything.”

“There are good things that came out of it, but I don’t think people saw, or maybe some people did, that it would simultaneously cannibalize other parts of the business in a very drastic way that has hurt many people in the industry, as we’ve all seen,” she continued. “One of the most important things you have to be willing and able to do to survive in the industry is to be nimble, to be ready to change, to be OK with change.”

What about you? Zoe asked Ocleppo.

“I’m lucky with [Judith Leiber], because it’s obviously a brand that’s been around since the Sixties, so it’s already established,” shared Ocleppo. “They’re quite unique. They’re not the easiest bags to knockoff. They’re evening bags, but they’re also pieces of, almost like, jewelry or art, collectibles. That kind of puts us apart from, say, a Louis Vuitton bag or any other kind of leather goods bag. So, I feel safe at my job so far.”

“They’re so good!” Nicky Hilton Rothschild yelled from the audience. Rothschild was next to address the crowd to introduce the second panel of the evening, which was sponsored by Aldo, Fila, FN Platform, Klarna and Off Broadway Shoe Warehouse. TV personality Tamara Dhia monitored the talk, which featured Anita Patrickson, stylist and founder of Amanu; Martha Garcia, director of global brand communications at Hoka One One; Kathy Kartalis, senior vice president of global product for Skechers, and Bianca Gates chief executive officer and cofounder of Birdies.

“I’m so happy to be here in my hometown with all of you beautiful boys and girls,” said Rothschild, who’s had a shoe collaboration of her own with New York City’s French Sole. “What a glamorous evening. Although, my life is about to get way less glamorous, because I’m getting on a red-eye right when I leave here and going straight to a parent-teacher conference in New York.” 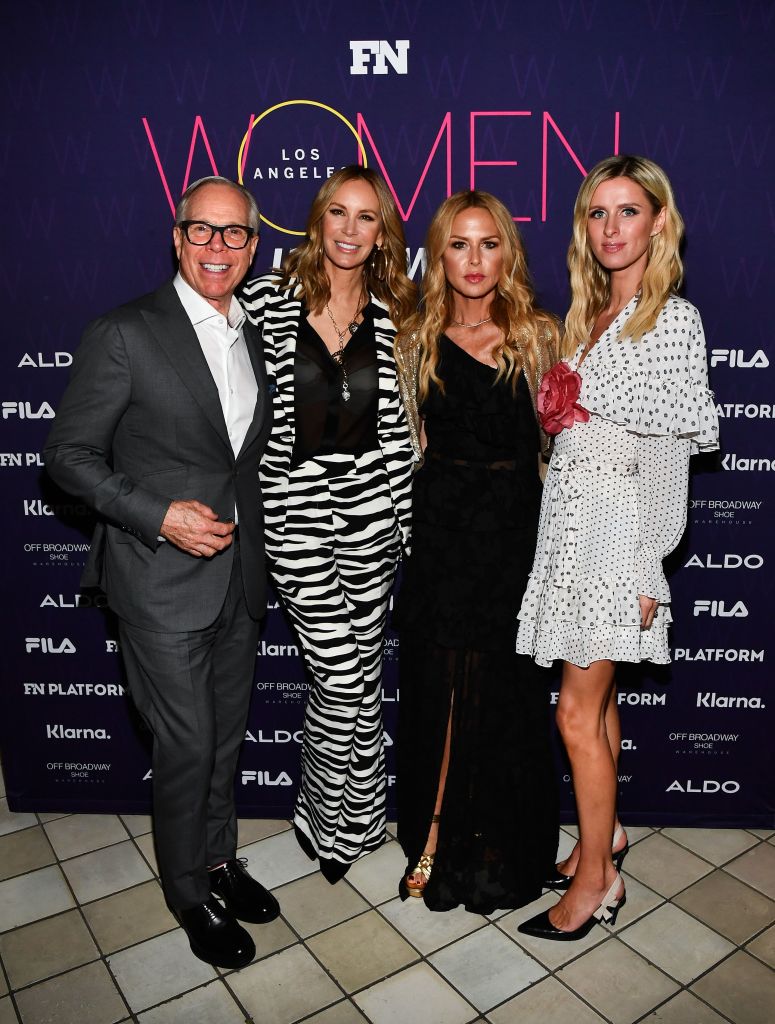