The legendary skateboarder introduced his signature collection in New York on Thursday.

NEW YORK — Tony Hawk never got to skateboard in the Olympics — but he’s OK with that.

The world’s most acclaimed skateboarder competed during a time when the Olympics weren’t on the radar for his sport, and even though they’ll make their debut in Tokyo next year, he doesn’t feel like he’s missed anything.

“I’m not really sorry,” he said. “I love that skateboarding was different and set me apart from the so-called mainstream. And to have any success in it was a dream come true. When I was young, the dream was not to be rich or famous, because that didn’t exist, but the idea that I achieved any semblance of that is unbelievable. I had a good run. To be in the Olympics was never the end-all because it was never an option and it was never something that I was aspiring to. We had it with X Games, our own events, video games.”

He’s also not banking on his friend Shaun White excelling in Tokyo — if he even winds up competing there. And it’s not because White is 32 years old. “It’s not his age,” Hawk said. “Some of the top pros, especially in the category that he skates, are that age. It’s more that his style of skating, his discipline, is not what the Olympics are. He skates more vertical, the big halfpipes, and that’s not an Olympic event. They’re going to have the park event, which is more about bowls and different obstacles like walls and pyramids. It’s not the big vert ramp where Shaun shines. There’s actually a qualifier in two weeks in Brazil so we’ll find out if he’s actually in the running or not.”

Hawk was in New York to promote his most recent project, the North American launch of the Tony Hawk Signature Line. The upscale eight-piece collection made its debut on Thursday at Reign, a luxury streetwear store, as well as 10 Corso Como, where Reign has a collaborative sneaker space. The line launched in Paris and London earlier this year and has performed well, according to a spokeswoman from Hawk’s team. “During the launch event at Browns,” she said, “we had to restock the store. And we’re now halfway through selling 600 pieces, so we’re ahead of projections.”

The collection of hoodies, T-shirts and sweatshirts features images of Hawk shot in San Diego by Dutch photographer Anton Corbijn. The photos show Hawk today, skateboarding, posing with a deck and observing other athletes practicing the sport. Other images from Hawk’s youth will be featured on collections offered later this year.

“Coordinating our schedules was tough, but once we got together, we shot what you see in a day,” Hawk said of Corbijn. “They were mostly shot around San Diego. It was raining that day so the action shots were all indoors, which was not ideal, but he made it work.” 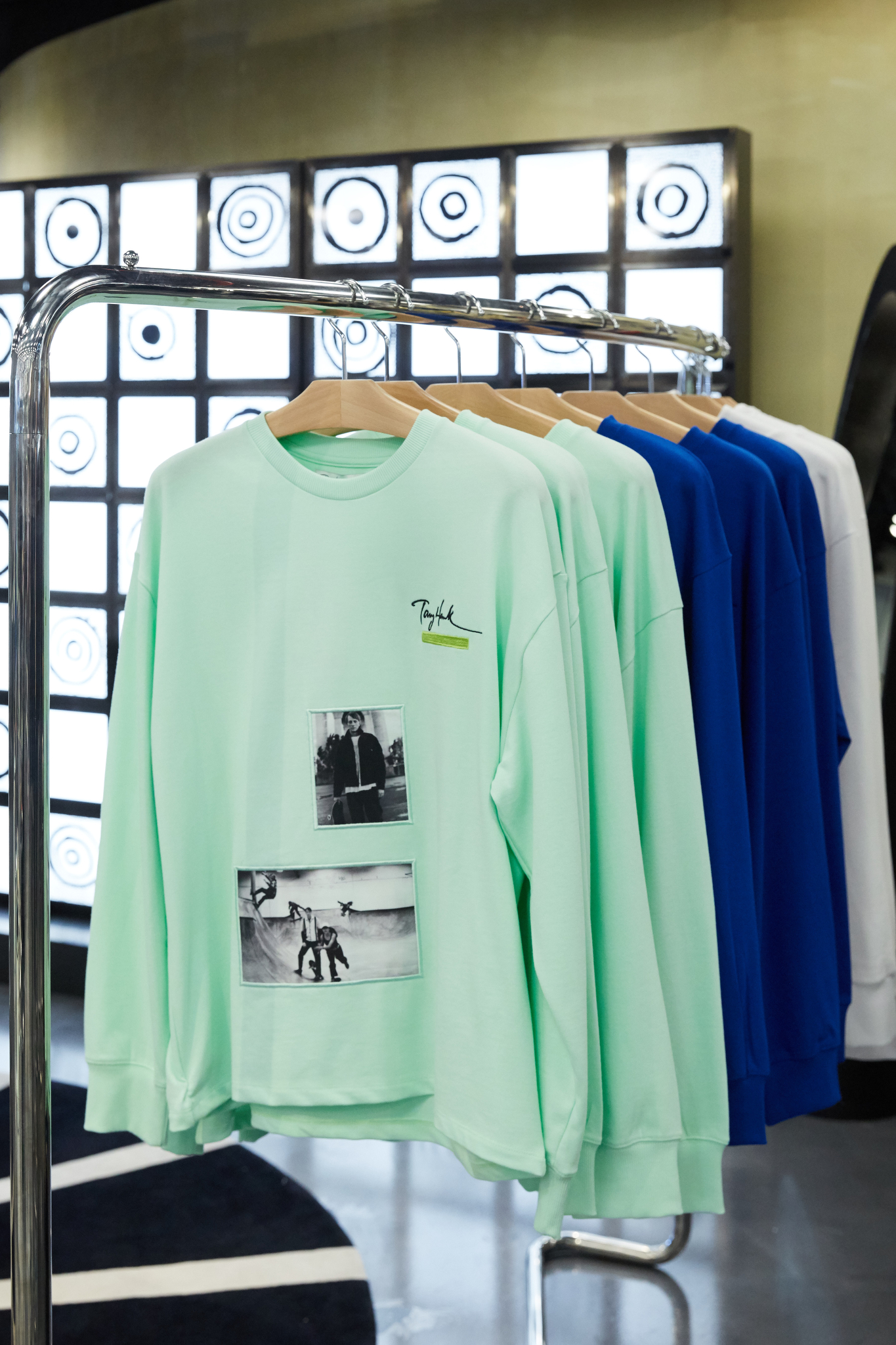 The collection retails for $80 to $200 and Hawk said his goal is to “do something in the mid-tier range — something a little more affordable, and maybe a little more avant-garde” in the future.

Hawk has been associated with the fashion industry for some time. He launched his first line, Hawk Clothing, as a kids action sports line in 1998. The line was eventually sold to Quiksilver, which in turn sold it to Cherokee Inc. for $19 million in 2014. Cherokee has since rebranded as Apex Global Brands.

Hawk, 51, said he’s hopeful that he will benefit from a renewed interest in skateboarding among the next generation.

“The idea that it influences fashion and culture has been a little more underground for the last decade and now it’s starting to emerge as one of the leaders,” he said. “If you look at the success of places like Supreme and Palace and Dime, they literally started as skate shops. I’ve been here the whole time and we’ve had some successes in the past with Hawk Clothing and my brand Birdhouse and there’s a bit of nostalgia to it. But I think it’s also a sign of the times that this is at the forefront and this is what kids are choosing. They are gravitating toward skate culture. It’s always been a little more raw and real to them and many mainstream sports seem to be a bit jaded. Skateboarders have always been very approachable and very relatable. You can go to a skate park and very likely see some of the top pros mingling with complete amateurs and beginners and that doesn’t happen in any other sport.”

Don’t expect to see Hawk wearing his own collection, though. He’s more apt to wear Vince or Rag & Bone. “It’s kind of weird to be wearing your own name so I tend to avoid the stuff that has that front and center,” he said. “I’m fairly casual and try to be relatively cool for my age, but not trying to hang onto some desperate youth. The kind of stuff I wear day to day is a little more subdued but functional for what I do.”