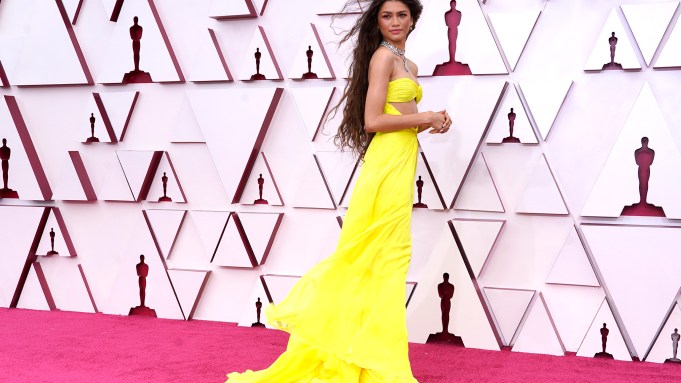 “Live TV, here we go,” said Regina King after taking a slight stumble in her custom Louis Vuitton gown on the Oscar stage.

The actor-director opened the in-person show, which went on without a glitch on Sunday. Even play-off music was seemingly nonexistent this year.

But that also meant there wasn’t much action. The ceremony was toned-down, putting the spotlight on the winners and their speeches. (See all the award winners.)

Still, there were history-making triumphs: Chloé Zhao became the first woman of color — and only the second woman ever — to win best director for “Nomadland,” the drama starring Frances McDormand (which also snagged best picture). Meanwhile, Mia Neal and Jamika Wilson — who were recognized for best makeup and hairstyling alongside Sergio Lopez-Rivera for “Ma Rainey’s Black Bottom” with Viola Davis and the late Chadwick Boseman — are the first Black women to win in the category, and Youn Yuh-jung became the first Korean performer to be awarded in acting when she took home best supporting actress for “Minari.”

There were surprises, although they didn’t come until the very end of the night. For one, the noticeably absent Anthony Hopkins was given best actor for “The Father” over Boseman, who’s been the favorite this entire awards season for his performance in George C. Wolfe’s film. And then there was McDormand’s on stage howl. Yes, howl, which Zhao discussed with reporters “backstage” following the ceremony.

Here’s that particular moment explained — and all the other behind-the-scenes highlights from inside the virtual press room:

• McDormand, known for her spontaneity, livened up the show when she tilted her head back dramatically and let out a sudden but impressive howl during her acceptance speech for best picture. (She also received best actress.) There was a touching reason behind it, it turned out. “The howling is for our production sound mixer Wolf, who you saw in the In Memoriam,” Zhao said. Michael Wolf Snyder, 35, died by suicide earlier this year. “We unfortunately lost him recently…so that howling to the moon is for Wolf.”

• Earlier, during a more lighthearted exchange, Daniel Kaluuya was asked why he had referenced his parents’ sex life during his speech. “It just came out my mouth, and my mom is probably going to text me some stuff, but here we are,” he said. “I’m gonna avoid my phone for a bit, man…I think my mother’s not gonna be very happy. But she’s gonna be cool….She’s got a sense of humor.”

While accepting Best Supporting Actor for “Judas and the Black Messiah,” Kaluuya had noted the importance of celebrating life, adding: “It’s incredible. My mom met my dad. They had sex, it’s amazing. Do you know what I’m saying? I’m here, do you know what I mean? I’m so happy to be alive, so I’m going to celebrate that tonight.”

• Yuh-jung, 73, revealed she was star-struck when she saw Brad Pitt, who presented her with her trophy. Though Pitt was a producer on “Minari,” the two didn’t have the chance to meet until then, in front of the world. “I saw him on the stage, and then he called my name,” she said. “I can tell he practiced a lot. He didn’t mispronounce my name. Then, that moment when I got there, I just lost what I’m supposed to say….He was a movie star for me. So, I couldn’t believe he was leading to me when he announced my name, and so, then maybe I just blacked out for a couple seconds or so.”

• Music artist H.E.R. shared her dreams of acting and receiving an EGOT (the acronym for the Emmy, Grammy, Oscar and Tony Awards). Just last month, the singer-songwriter received her first Grammy, and now here she was accepting her first Oscar. “Oh, there’s absolutely going to be an EGOT in my future, hopefully,” she said. “You know, I’m also super passionate about acting as well, so you may see me up here as an actress, and I love musicals…I’m still speechless. I feel like the Oscars are happening tomorrow, and I’m dreaming right now. I’m still pinching myself. I have no words.”

• Tyler Perry, who received the Jean Hersholt Humanitarian Award, explained the inspiration behind the words he said during his speech. “Everybody’s grabbed a corner and a color, and nobody wants to come to the middle to have a conversation,” he told WWD. “Everybody’s polarized, and it’s in the middle where things change. I’m hoping that that inspires people to meet us in the middle so that we can get back to some semblance of normal as this pandemic is over, [and] we can all get to a place where we’re showing love and kindness to each other again.”