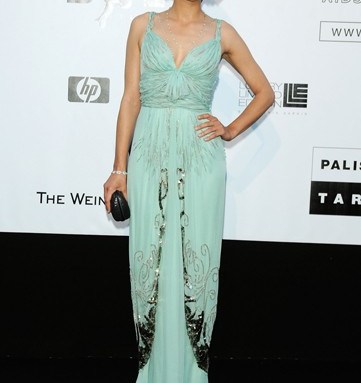 The economy might be in tatters, but leave it to Sharon Stone to persuade film industry bigwigs to part with their dosh during amfAR’s annual Cinema Against AIDS benefit auction Thursday night. She had some help in wrangling bodies to the Hotel du Cap-Eden-Roc Cap d’Antibes: the evening’s guest of honor was former President Clinton. A lucky few, including amfAR chairman Kenneth Cole, co-sponsor Harvey Weinstein, with his wife Georgina Chapman, Kerry Washington and Josh Hartnett even got to talk golf and Bond movies with the former president during a private meeting and photo call.

Lauding Clinton’s tireless commitment to fighting AIDS, Stone, the night’s compère, drew laughter when she said, “He could have easily retired — like some do while they’re still in office.”

“Thirty-trillion dollars of wealth disappeared between Sept. 15 and Feb. 15, and a lot of it came out of some of your bank accounts,” Clinton told the crowd, including Claudia Schiffer, Robin Wright Penn, Elizabeth Hurley and Marion Cotillard. “When things get tough, give more, not less.”

Prior to the bidding, Stone paid an emotional tribute to the late actress Natasha Richardson, followed by Annie Lennox’s resounding performance of “There Must Be an Angel.”

Hardworking auctioneers included Hartnett, who promised he and Stone would take off their clothes if bids for a Fiat customized by Diesel’s Renzo Rosso topped 100,000 euros, or $137,709. They didn’t.

“Never been a car salesman before,” Hartnett said afterward.

Clinton slipped out before the last hammer fell. Word has it a private boat party was calling.