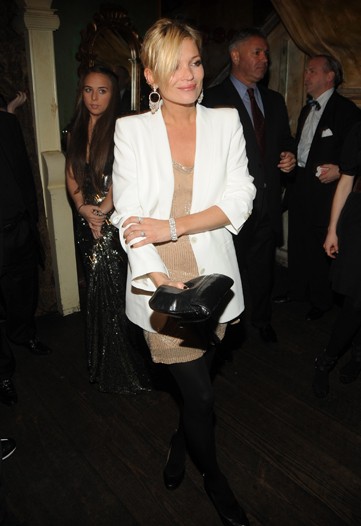 The Topshop celebratory marathon in New York hit the homestretch Thursday with a late night of musical performances and debauchery at the Box. And it seemed that some were feeling a few signs of party fatigue.

“Give me a f—ing moment!” Topshop designer and unofficial spokeswoman Kate Moss snapped at photographers. She never returned for another photo op.

But other members of Team Sir Philip Green were still ready to play ball. “Philip and Tina [Green] are the only ones who can get us out two nights in a row,” said Jennifer Lopez.

Adele’s surprise performance was the tamest portion of the night. The DJ mixed M.I.A. with Stevie Wonder, J. Lo and Anthony boogied down and Simon Cowell got a lap dance from a girl in a fringe dress.

“Simon Cowell getting a lap dance is the funniest thing I’ve ever seen,” Zach Braff said.

Later Kevin Spacey, who became friends with the Greens in London, took to the stage to belt out “I’m a Gigolo” with Raven O. “That was brilliant,” said one guest, “but I’m still scared of the women without underpants.”

Emcee and Blue School dad Jon Stewart couldn’t help but poke a little fun at the school’s ethos (and its $27,300 tuition). “There are some drawbacks to going to a Blue Man Group school,” Stewart said. “Both my children spend their time trying to cram their heads into my television set.”

The night before, Henry Street Settlement threw its annual dinner dance in the Plaza’s Grand Ballroom. Jamee Gregory bid on a Canyon Ranch package during the silent auction, and a weeklong stay at Jacqueline and Mortimer Sackler’s four-bedroom villa in the Turks and Caicos went to Edmond Safra for $40,000.

Tatiana von Furstenberg, the evening’s honoree, then gave a speech that was short and sweet. “I’m not a very good public speaker,” she admitted.