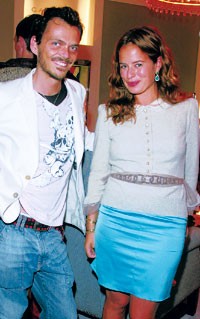 Garrard’s lounge-like SoHo salon is something of a second home for Jade Jagger — at least when it comes to partying. Here this week to preview Garrard’s new line, inspired by her six-week journey to India, Jagger teamed up with friend Damon Dash and invited 40 or so of their best friends to an intimate dinner. Over the course of the evening, the jewelry salon was transformed into a louche lounge, replete with smoking Englishmen, dancing supermodels, hip-hop impresarios and even a magician, David Blaine.

“I’m not doing any shows, and it’s bliss,” offered Dahl, who was joined at the dinner by boyfriend Dan Baker. “We are moving house and I have been in and out of furniture shops all week.”

For the dinner’s after party at N.A., the new nightclub in the old Nell’s, Jagger changed into a slinky Rocawear top embroidered with her name across the back.

“Jade’s a great friend,” gushed Dash, who heads Rocawear. “She always looks after me when I’m in London.”

Earlier in the evening, the Cartier mansion also morphed into a luxe lounge when Zac Posen’s posse packed into the Fifth Avenue store for his post-show bash, which also celebrated the launch of the Cartier Trinity line.

There to toast him were his pals, Bee Shaffer and Stella Schnabel. Claire Danes, who’s championed Posen from the get-go, couldn’t remember how many of his shows she’s attended, but attributed her brain freeze to her third pink cocktail. As for the collection, her favorite looks were the wearable whites that incorporated Teflon.

“I think it’s innovative and handy,” she said, before adding, “God, I need more appetizers.”