Sheryl Crow and Lance Armstrong were as giddy as a pair of high-school lovebirds at the dinner David Lauren hosted Thursday night to celebrate the release of Crow's new album "Wildflower." 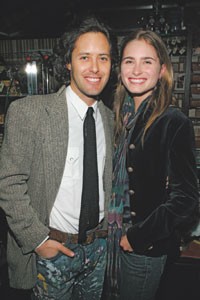 NEW YORK — Sheryl Crow and Lance Armstrong were as giddy as a pair of high-school lovebirds at the dinner David Lauren hosted Thursday night to celebrate the release of Crow’s new album “Wildflower.” “They are the most wonderful couple,” Lauren said, while Crow and Armstrong blushed at their table. In between kissing and holding hands with her beau, Crow nibbled on her Sant Ambroeus supper and chatted with guests.

The songstress, in town to perform on “Saturday Night Live” and at Lincoln Center, was clad in a curve-hugging Ralph Lauren suit rather than her usual down-home denim duds. “I own 175 pairs of cowboy boots,” she said. “And even before I was well-known I was collecting Ralph Lauren. Now I have so much that we’ve archived everything, and I always tell Ralph that if anything happens to me, I’m going to will everything to the Double RL Collection.” She’ll soon have one more piece, as the designer is making her wedding dress for her upcoming nuptials.

In between courses, Joy Bryant, Jacquetta Wheeler and her boyfriend, Alexi Lubomirski, snuck out for quick smoke breaks. Bryant was still pumped from the U2 concert last week. “I just couldn’t believe that Bono came up to me,” she said about the backstage scene. “Then I met The Edge, and I couldn’t speak. My friend had to tell him that I was really excited to meet him, because I just stood there with my hand over my mouth. I still get so starstruck.” She shouldn’t — the willowy actress will soon be making a starring turn opposite 50 Cent in “Get Rich or Die Tryin’.”

Uptown, Uma Thurman helped celebrate H.Stern at the International Neuroscience Foundation benefit held at Strata. The “Prime” actress huddled with Zac Posen upstairs while Alex Kramer, Charlotte Ronson, Lulu de Kwiatkowski and Shoshanna Lonstein Gruss shimmied on the dance floor to Eighties hits. “This place reminds me of the first show I did when I was, like, 15,” Posen said. “Modeled, I mean. It was for this line Alan and Suzy and there were a bunch of transvestites in it.”

The previous night, Julianna Margulies, Edie Falco, Liza Minnelli and Larry King made it over to Cipriani 42nd Street for the Princess Grace Awards, where King admitted he’s been obsessing over the Judith Miller saga. “The whole press has turned on her,” he said. “I couldn’t believe the access she had. But just because they’re big sources doesn’t mean they’re telling the truth.”

Meanwhile, the always lively Lucy Sykes was holding court downtown at The Gramercy Park Hotel, where husband Euan Rellie, Bettina Zilkha and Olivia Chantecaille were previewing Tanner Krolle’s spring 2006 collection. “They asked me to be a co-host and I said, ‘Get me a free pair of boots and I’m there.'” Sykes laughed. “I’m a reeeeeally cheap date.”