Emmanuel Perrotin knows what it means to sacrifice on the altar of art ... A tribute exhibition for Keith Haring's sculptures ... The party scene thaws. 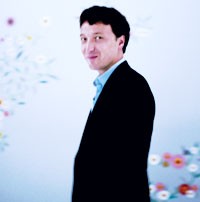 PARIS — Emmanuel Perrotin knows what it means to sacrifice on the altar of art.

Few will forget when in 1995 the French art dealer dressed up in a costume that transformed him into a penis with fuzzy rabbit ears on top, at the behest of artist Maurizio Cattelan. He did this every day for six weeks. “Today, it seems so easy to do,” Perrotin chortles, recalling his willingness to engage in the provocative Italian’s high-art prank. “But it was before Maurizio was really big. Anyone could do it now.”

Sure. But then Perrotin — whose acclaimed artists include Takashi Murakami, Sophie Calle, Bernard Frize, Paola Pivi and, of course, Cattelan — has long had a tendency to ignore coziness for art’s sake. Up until last year he still bedded down in cramped quarters behind his gallery in the grimy 13th arrondissement.

“It was hard going until about five years ago,” admits the determined 36-year-old, who never graduated from high school. “But I kept my eye on the art.”

Since he started at age 18, Perrotin has gained a solid reputation for identifying and nurturing talent and then giving them financing to produce cutting-edge art. He was the first person to show Damien Hirst’s work in France and he bankrolled the production of Cattelan’s infamous “Nona Ora” sculpture of the Pope flattened by a meteorite. The piece’s value has soared from $80,000 in 1999 to $3 million last year.

“I’ve produced works for most of my artists,” he says. “I’ve taken chances. But, paradoxically, I wasn’t even able to show much of the art I produced. My gallery was too small.”

Now Perrotin is turning a page. He recently got a “proper and comfortable” apartment and this year he’s hoping to widen his influence exponentially. Late last month he unveiled an ambitious new gallery, an impressive 2,500 square feet, in a sublime 17th-century mansion on the Rue de Turenne in the groovy Marais.

“People were saying that we were an important gallery for some time now,” relates Perrotin, who says he’ll keep one of his two galleries in the 13th arrondissement for “projects.” “But when clients came to our place it didn’t seem to live up to their expectations,” he adds. “American collectors will like [the new place] better.”

Yet Perrotin, who is friendly with fashion types from Hedi Slimane to Vanessa Bruno, isn’t abandoning his bohemian ways. He’s installed a Foosball table “for chilling out” in the gallery’s soundproof basement and has a high-tech central sound system with enough power to blow the top off Mount Everest.

He’s also tackling America. In December Perrotin will inaugurate a sprawling 16,000-square-foot gallery in Miami designed by hip young architect Chad Oppenheim. Apart from its soaring exhibit rooms and a door “big enough to drive an 18-wheeler through,” it will have several apartments for artists, as well as a pool.

“If I don’t do it now, at my age, I’ll never do it,” says Perrotin of his moves. “It’s important to be in the American market. And Miami’s got such energy right now. There’s not an international gallery. I can create a situation.”

That’s not to underestimate the importance of the Paris market, he says, questioning the notion that New York is the only important center for contemporary art.

“People seem to forget that we have François Pinault and Bernard Arnault [in France]. There are a lot of French collectors, but they are very discreet. Don’t be surprised if you see a lot of [international] galleries open in Paris soon.”

Perrotin’s twin spaces are sure to propel him to a heightened plane of influence. Yet he insists he’s still happiest just by getting a frisson from seeing good work. “It’s just the way I am,” he says. “I’m so optimistic and positive.”