Mathias Augustyniak and Michael Amzalag, the French design phenoms behind M/M (Paris), have applied their high-brow aesthetic to everything from ads... 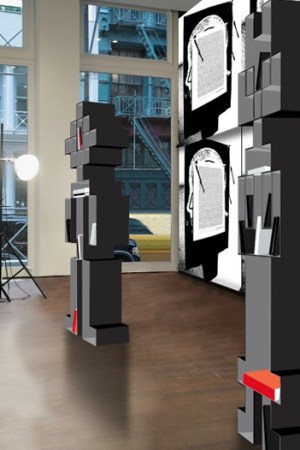 Mathias Augustyniak and Michael Amzalag, the French design phenoms behind M/M (Paris), have applied their high-brow aesthetic to everything from ads for Calvin Klein and Balenciaga to art installations. The duo’s newest venture, The Future Library, a continuously evolving installation project featuring “robot” shelves, will be unveiled at The Armory Show in New York and then displayed at Swiss design firm USM Modular Furniture’s SoHo showroom through May 2. In its first incarnation, The Future Library will play host to an M/M (Paris)–designed book collection “The Conversation Series” (D.A.P. Inc.), a 14-volume series of interviews between famed curator Hans Ulrich Obrist and legends such as Rem Koolhaas and John Chamberlain.

Here, one half of M/M (Paris) discusses the team’s latest convention-eschewing endeavor.

WWDScoop: How did you get involved in “The Conversation Series” project?
Mathias Augustyniak: We’ve known Hans Ulrich for a long time, and I was thinking it would be good to brand  at the scale of a human being. Just as each Coke product has its own logo, it was important to do the same for him.
WWDScoop: How was working with him?
M.A.: It’s a conversation itself. I say “blue,” he says “red,” which leads to something else, and this builds realities. The Future Library started with a utopian idea, which become real through a series of conversations.
WWDScoop: Where do the robot shelves come in?
M.A.:  We designed the robot shelving system when we were working for the Palais Tokyo in Paris. At the time, we created a typeface that was just those little robot figures. We always thought it would be nice to do a shelving system because we design so many books, [so we] designed a system based on the typeface. Right now, it’s just one visible part of the bigger Future Library project.