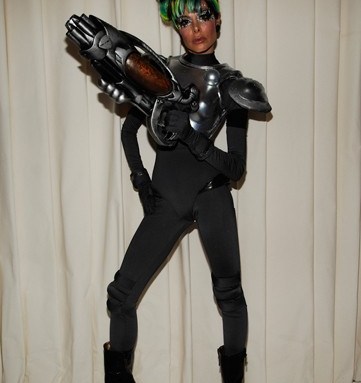 “Come as you are” was definitely not the ethos at Allison Sarofim’s Halloween bash on Saturday night. Not only did guests like Ann Dexter-Jones, Jennifer Creel and Olympia and Fiona Scarry face a strictly enforced “costume required” door policy, but the Japanese anime theme challenged even the most seasoned disguise designers.

“I was at a dinner in Moscow for Larry Gagosian, and I was seated next to [Takashi] Murakami, and I thought, ‘Oh, anime,’” explained Sarofim, who channeled a Japanese superhero named DNA for the occasion. (“You should Google her,” the hostess told clueless guests.)

Not surprisingly, many partygoers opted for a more lax approach. Karate Kids, Cold War spies and Japanese tourists crowded into the hostess’ West Village town house, where the snacks on offer were sushi and McDonald’s Happy Meals handed out by a Ronald McDonald look-alike (“I ate McDonald’s all the time when I lived in Japan for a year,” explained Sarofim).

Reveler Rob Weisenthal had covered a white jumpsuit with working lights in honor of the Sixties American comic book character Lightning. “I got it all from Home Depot,” he boasted as he blinded those caught in his wake.

Threeasfour’s Ange already had her costume at home, “It’s made of tapes from all those Eighties one-hit wonders,” she said of the geisha wig fashioned from recycled cassettes. Meanwhile, Chris Benz took the theme and ran with it: he strutted through the party in 6-inch pink platforms and a matching full-body unitard that he had specially ordered from Japan.

“I call it ‘Pretty in Pink,’” he said of his somewhat puzzling ensemble. “But I live down the street, so I can change before I go out again.”

If only the party had been in Tokyo. “This would be streetwear in Japan,” said Cynthia Rowley of her Harajuku-inspired getup that consisted of an iridescent minidress and bubble-gum pink wig stuffed with balloons. “I wanted to wear crazier tights but my husband was like, ‘No.’”