A glance at the current Broadway marquees makes a strong case for the predominance of compelling and challenging theater roles for women of various age and... 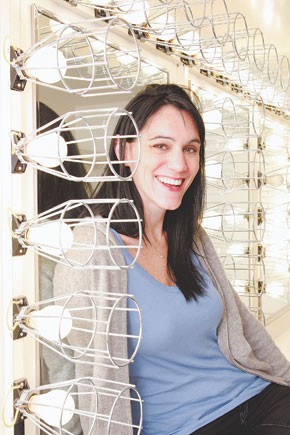 A glance at the current Broadway marquees makes a strong case for the predominance of compelling and challenging theater roles for women of various age and experience. Veteran Irish actress Sinead Cusack is wowing audiences in “Rock ‘N’ Roll,” Rosie Perez is putting on “The Ritz,” Phylicia Rashad is taking a stab at Shakespeare in “Cymbeline” and White Way neophytes Jennifer Garner and Claire Danes have both found meaty parts in classic works. But behind the velvet curtains it’s a different story as female directors are still rare enough to warrant a gender descriptive.

Though young by most standards at 33, Leigh Silverman has already carved a niche for herself working almost exclusively on new plays, including Lisa Kron’s “Well,” which in 2005 made her one of the youngest women to ever direct on Broadway. Her latest effort is David Henry Hwang’s “Yellow Face,” which opened last week at the Public Theater.

Sitting in the Public’s green room, Starbucks in hand and suffering from a cold, her enthusiasm and passion make it clear why and how the lanky, raven-haired Silverman has earned such notice in what she describes as “firmly an all-boys’ club.”

“For me, it’s about the singular experience of being in a community of people who come into a show and, depending on the energy of that audience, the energy of the actors, something kinetic happens. Something that is truly unique each night and I think that it’s so human,” she explains of her commitment to her chosen medium. “You feel connected to the people around you.”

With “Yellow Face,” Silverman has the task of juggling a stylistically complex and politically charged work. Written by Hwang of “M. Butterfly” fame, the play is narrated by his dramatic alter ego, DHH, who is protesting the casting of the Caucasian Jonathan Pryce as the lead in “Miss Saigon.” When his objections go unmet, he decides to write a new work, “Face Value,” and ironically casts a Caucasian actor by accident and, discovering his mistake, concocts a ludicrously fake ethnic background to mask his error. The consequences of his cover-up initiate a spiral of events that challenge his own identity issues.

“Our first meeting didn’t go that well,” he admits. “I walked away going, ‘Well, I don’t know if she really understands the play.'” He went home that night, realized Silverman’s critiques were on point and quickly changed his mind. “I think she’s a very humane director. You sometimes have directors that are emotionally strong but not analytically strong, the heart part is bigger than the head part. And then you have directors that are the reverse, that are very intellectual but they don’t bring any warmth or emotion to the process. Leigh is able to do both. The heart of the production and the emotions of a production are always really important to her, and yet she’s able to get there if need be through the use of argument, through intellect and ideas.”

Intelligence is an adjective that seems to recur among Silverman’s supporters. Growing up in Washington, she did a summer acting program in Cambridge, England, but it didn’t go as she planned.

“This teacher said to me after the first day, ‘Oh, Leigh, you’re terrible!'” recalls Silverman with a grin. “I freaked because I thought she was going to send me home. But in fact what she said was, ‘You’re really smart and you should maybe think about directing.'” So while the other kids were studying their parts, a then-15-year-old Silverman spent the summer reading Ibsen, Shaw and Chekhov and sitting beside her instructor watching rehearsals. “It changed my life. She saved me from a very heartbreaking career as an actor.”

Silverman went on to study playwriting and directing at Carnegie Mellon University and then moved to New York, where she juggled temp work, assistant jobs and attempts to direct her own plays (one of her pieces, “Brandon Teena,” had a run in 1999). But working with contemporary playwrights on new work was always foremost in her ambitions.

She spent seven years working with Kron on “Well.” Though their efforts were fruitful, bringing them to Broadway, for every such success there is a drawer full of plays that never see the light of day, despite months or even years of toil.

“The futility of what we do is always a shock,” says Silverman. “I mean [playwright] Tanya Barfield and I have worked together for a decade now and ‘Blue Door’ [2006] was the first play of hers that we worked on that actually got produced.”

Silverman will collaborate with Barfield again next year in Los Angeles, in addition to Brooke Berman’s “Hunting and Gathering” and preliminary work on a musical based on Neil Gaiman’s “Coraline,” with a score by Steven Merritt from the Magnetic Fields.

Yet for all her boundless energy and earnest love for theater, Silverman is all too familiar with the disappointed pangs that come with such a behind-the-scenes occupation.

“I wish sometimes that I didn’t care so much. It can be devastating and it can be brutal and it’s often deeply unfair, and so every day I think that maybe I should find something else to do. It’s that part of me that thinks maybe I could learn to make cupcakes and open a bakery,” she sighs. “But could I really do that? Never.”