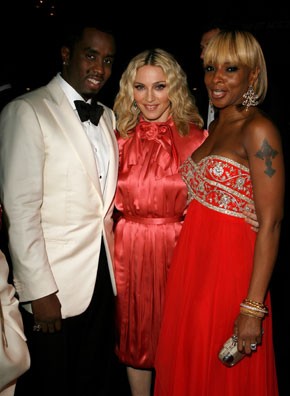 Stars and designers made their way up to the Moulin de Mougens for amfAR’s 15th annual Cinema Against AIDS gala Thursday night. As usual, Sharon Stone presided over the auction, but she shared the spotlight with Madonna, who was making her first appearance in Cannes with her documentary “I Am Because We Are.”

“For those of you who thought we were two bitches who hated each other, I have news for you,” said Stone, who rallied the crowd, including Valentino, Tommy Hilfiger, Dean and Dan Caten, Giuseppe Zanotti and Roberto Cavalli, to each pitch in $100,000 to build a pediatric AIDS center in her name. “That was the best 50th birthday present ever,” she said.

Among the other goods up for auction were a private two-song concert by Madonna, a one of a kind Chanel alligator bag (to which Madonna added her lip gloss and blotting papers, though not her BlackBerry, saying “You couldn’t afford it.”), a Dior diamond phone and packages for Paris and Milan fashion weeks. “Like we have to pay for that,” laughed Stavros Niarchos, seated with pal Margherita Missoni. But others did pony up – the evening raised a record $10 million.