LONDON — Amanda Ferragamo had never thought about writing a book — "I am heavily dyslexic," she says — until a few years ago when she woke up at 3 a.m. and began penning a story about a bombed-out villa, a Scottish terrier and the... 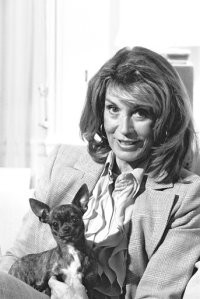 LONDON — Amanda Ferragamo had never thought about writing a book — “I am heavily dyslexic,” she says — until a few years ago when she woke up at 3 a.m. and began penning a story about a bombed-out villa, a Scottish terrier and the team of Italian construction workers she may — or may not — have tamed.

The result is “Seven Years in Tuscany,” Ferragamo’s account of the time she spent rebuilding Il Borro, the 1,750-acre Tuscan estate that she and her husband, Ferruccio Ferragamo, from whom she is now separated, bought in 1993.

“I wrote this in three months, by hand, from memory,” says Ferragamo, who has returned to her native England after living in Florence since the late Sixties. “And yes, I’d say it was a purge.”

The book, which will be launched in New York with a book party at Saks Fifth Avenue on April 3, is one part how-to manual — “Skirting boards are important and they need to be quite deep,” she writes — and one part nesting philosophy: “A house can almost talk to you: Standing in ruins, it will tell you through empty windows and stairs going nowhere how it was, who lived in it.”

But Ferragamo also devotes pages to the infamous Tuscan laborers who were clearly not used to having an English signora not only telling them what to do, but asking them to do it over again.

“I don’t think they ever expected me, as a woman, to be there, talking about the density of the cement,” she says. The workers were required not to re-lay tiles that weren’t quite right, tear down a new staircase because it looked “too ‘Gone With the Wind,’” and work through rain and snow.

“There was a slight drizzle one day, so everyone decided to take a break,” Ferragamo says. “I said ‘What is this break for?’ In England, if we stopped for the weather, we’d all be living in tents!” The workers, in turn, poked fun at her Italian, often wandered off the job, and secretly named the stray cat they found after her.

Today, the 19th-century villa, which had been bombed to bits by the Germans during World War II, serves as the Ferragamo family’s country home. The grounds have been transformed into a working farm and the medieval village restored.

In the foreword to the book, Ferragamo’s brother, Sir Michael Peat, who resigned as the private secretary to Prince Charles last week, and was Queen Elizabeth’s former accountant, pays tribute to his sister’s chutzpah.

“Neither Amanda nor Ferruccio had any significant experience of restoring old buildings or of land management, and I wondered whether they fully appreciated what they were taking on,” he writes.

Although Amanda has not returned to Il Borro since she left in the summer of 2000, she insists she doesn’t miss it.

“It’s done, over. It comes into my dreams, though. And when I’m walking past a building site, I can’t help but think to myself ‘Where’s the piping going to go? And how is the electrical wiring going to be installed?’”

Today, she writes a column for 213, a Los Angeles magazine, and is carving out a new life in London. “Now I want to live! I want time to go to the hairdresser, to go to lunch, to travel, to be a woman,” she says. What would the workmen think of that?