The actress has played Arachne, the counterpoint to Spider-Man in the high-flying and very expensive musical, since December. 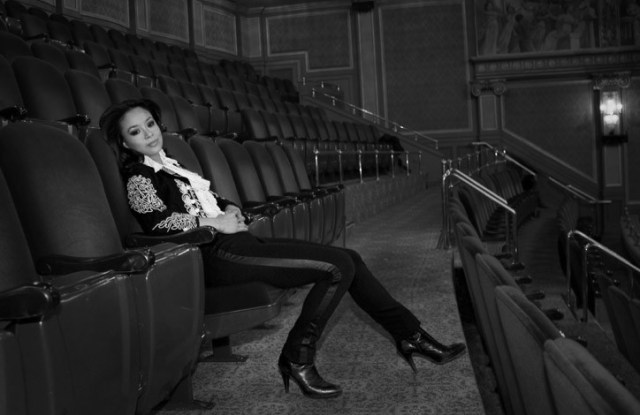 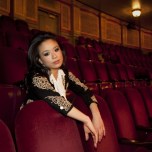 On Tuesday morning, T.V. Carpio was in her basement dressing room at Manhattan’s Foxwoods Theater expounding on her latest role and sounding a bit like, well, a comic book character in the process.

“I can’t put fear out there, because I believe fear does breed fear,” the actress said of playing Arachne, the lead villainess in “Spider-Man: Turn Off the Dark.” “I had a concussion when I did ‘Rent.’ Not to minimize what has happened, but the fact is, we’re doing circus theater here. There’s an element of risk. There are a lot of stunts.”

Carpio, a pretty 29-year-old whose build is somewhere between petite and flat-out tiny, sat on a recently installed vintage-store couch dressed in a bolero jacket — another vintage-store find — and fitted black pants. At 5 feet 2 inches, Carpio has an offstage presence that doesn’t at first suggest supervillain, but as she talked, her body language took on definite arachnid undertones. When she gestured her arm across the couch to make a point, she used a deliberate motion that looked as if it required no more energy than was absolutely necessary. It was suddenly easy to envision her gracefully wielding four extra limbs.

Since Dec. 23, Carpio has played counterpoint to Spider-Man in the high-flying, and very expensive, musical, a role that requires a harness and a solid imperviousness to heights. For those who haven’t kept up with the injury reports and pushed openings of the biggest-budget musical in Broadway history, Carpio is the nascent production’s second Arachne. The show’s producers promoted her from the chorus following the departure of the original Arachne, Natalie Mendoza, who suffered a concussion during the first preview performance in November. Mendoza’s was the first in a series of injuries to plague the production’s oft-extended preview run (it is now slated to officially open March 15), including a Dec. 20 incident in which a stuntman fell from his harness and fractured his skull.

The accidents and delays, when matched with the sheer scale of “Turn Off the Dark” and the high profiles of its celebrity creators — Bono and The Edge of U2 contributed music; Julie Taymor co-wrote the book and is directing — have earned the show obsessive levels of public attention and scrutiny. When Carpio stepped in for Mendoza, The New York Observer joked that she was taking the most dangerous role on Broadway.

Sitting a floor below the theater, where stagehands and technicians were prepping the stage for all-day rehearsals, Carpio said she hasn’t paid attention to the early reviews, for the most part.

“The music in this is really amazing,” she said. “My mother gets these Google Alerts of me, and so she sends me these blogs and things people say. No matter what you try not to read, I’ll read some of it. There’s a lot of people saying the book and the music aren’t up to par, and we’re working on those things. But really I think the music — I went to a lot of Broadway shows as a child because I visited my father in New York, so I went to see ‘The Will Rogers Follies,’ ‘Cats,’ ‘Phantom,’ ‘Miss Saigon,’ ‘Les Mis’ — and I really think that the music [in “Turn Off the Dark”] is amazing.”

Carpio, whose mother is Hong Kong pop star Teresa Carpio, was raised in her mom’s adopted city, New York, where her late father, Peter Mui, operated a garment business, and Springfield, Mo. (“My mother became a born-again Christian,” she explained of that last one.) Her early dreams of a life as an Olympic figure skater didn’t quite work out, so she ported her skill set over to acting. Her breakthrough came playing Prudence in Taymor’s 2007 Beatles-themed movie musical, “Across the Universe.” Carpio is a champion of the director’s creative process, despite its very public airing in recent months.

“She finds out what your talents are and tries to use those versus just having the role and having you just do what’s in her head,” Carpio said. “Working with Julie is a gift.”

It’s a reward that Carpio is set to receive daily for a while. Though the preliminary reviews have been mixed, the ticket-buying public has made “Turn Off the Dark” a quick hit. So Carpio could be in that most dangerous role indefinitely.

“I wouldn’t say my role is the most dangerous role,” she said. “Maybe one of the other Spider-Men flying around. Or, actually, have you ever seen any of those ‘O’ Cirque du Soleil shows? Those are pretty dangerous too. Maybe they’re not on Broadway yet.”