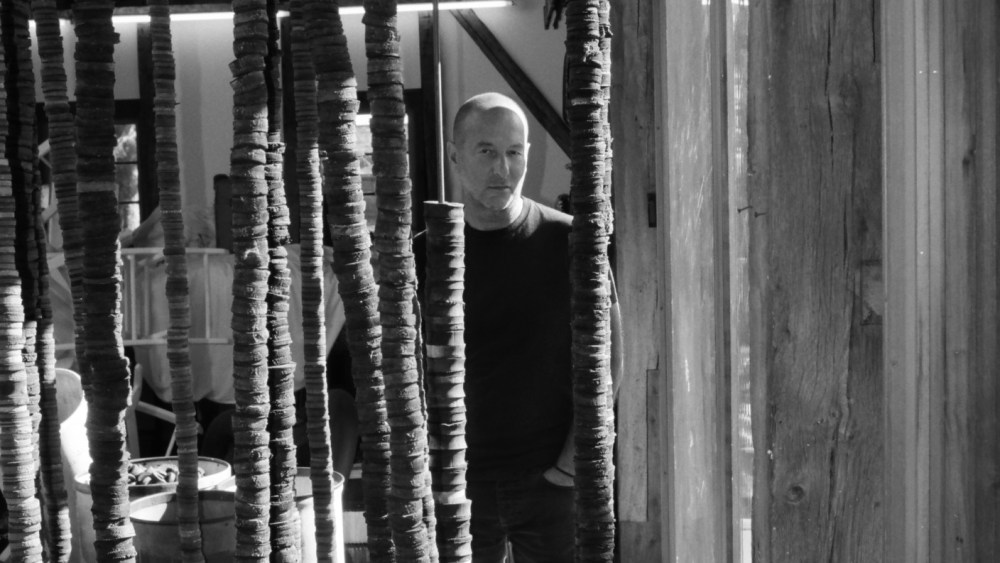 Helmut Lang checked out of the fashion industry 15 years ago, but his life as an artist has only intensified.

A solo exhibition of his art will open Sunday at the Museum of Contemporary Art in Westport, Conn. The show will feature all-white wall reliefs and sculptures, wall-mounted planes, pillars and spikes in the first gallery. There will also be 63 pillared sculptures made with shredded and crushed objects, including remnants from Lang’s destroyed design archive that are suspended in pigmented resin, in the second gallery. Agile at “sorting through the wreckage of history,” Lang’s sculpture is very post-apocalyptic, “especially since so much of it is not only found materials but completely dissolved and pressurized condensed materials that you can imagine being pulled out of a disaster site,” said curator Todd von Ammon, who has an ongoing working relationship with the artist.

Von Ammon continued, “We’re living and working in this sort of post-modern, post-history era. He started the design company in the fallout of the Cold War around the fall of the Berlin Wall. His impact as a cultural figure, and the messages and the concepts he’s deployed since the dawn of his career have always been highly critical of history and grand narratives. You can see how he’s disrupted the codes of not only the fashion world, but the cultural and aesthetic worlds. I believe that almost every decision or gesture that Helmut makes is meant to dismantle some status quo, including even in the art.”

Even after all this time, Lang’s shadow still casts far in fashion’s pantheon. Following certain runway shows, some futuristic, utilitarian-leaning designers can still have their collections summed up as: “It was very Helmut Lang.”

In 1997, the Viennese-born Lang broke away from other designers in Europe and moved his business to New York. His decision to show his collection in New York and at the beginning of New York Fashion Week prompted organizers to shift the entire show calendar so that New York preceded London, Milan and Paris. Not one to trail the pack, he had staged his first runway show at the Centre Georges Pompidou in 1986 and years later he ditched shows altogether, preferring to stream his collection online. Lang’s preference for the unconventional could be seen in such materials as rubber, feathers and prestige denim — before it was a commodity. Over time, he built what was nearly a $100 million business.

In 1999, he sold 51 percent of the company to the Prada Group and then the remaining stake in 2004. As is often the case with marquee names that join forces with conglomerates, there were clashing views about direction, artistic control, licensing and global expansion. Sales subsequently went south to about $30 million. In January 2005, Lang walked away from fashion for good to focus full-time on art and one year later the company was sold to Theory Holdings, Co. Ltd., which is now part of Japan’s Fast Retailing.

In 2010, a fire destroyed a large part of his archives in a Mercer Street studio, but Lang carried on. The artist, who turns 64 today, is committed as ever to his art, dividing his time between studios in Long Island and New York.

As von Ammon sees it, “He’s always been ahead of the curve and that’s what’s interesting about him. He does it in this very quiet, secretive way.”

Fashion enthusiasts in need of something, anything Helmut Lang will have to make do with a commemorative $45 MoCA Westport T-shirt, or they can spring for Lang’s art, which starts at $35,000 and will be available via von Ammon’s Washington, D.C., gallery.

Completely consumed with art-related deadlines over the weekend, Lang responded to questions via e-mail.

WWD: How does art compare to fashion?

Helmut Lang: These are two very different sets of circumstances, so you cannot really compare them. There is a good quote from Yves Saint Laurent about this in relation to fashion, “Fashion is not quite an art, but requires an artist in order to exist.”

WWD: Can you describe how you made the pieces for the show? What are some of the techniques and how long does it take? Does it require a good amount of physicality?

H.L.: Most of these works were produced between 2012 and 2013 — some of them in 2011. Regarding the production procedure, I can’t fully disclose the process, but yes, it does require a good amount physically, as do most of my sculptures.

WWD: How do you approach each day? Do you like to keep to a schedule or prefer a way of working?

H.L.: I’m not working on a strict hourly schedule. It depends more on what is required for a particular piece or project.

WWD: Do you ever miss fashion design?

H.L.: I’m too deeply involved with my artwork to say.

H.L.: For me, personally, and in either discipline, I didn’t have a specific source of inspiration per se. It is all about going ahead and intuitively finding out along the way. Whenever I am at the point when a piece is strong enough to fight me back, I will consider to stop or continue.

WWD: How are you able to express yourself in art in a way that fashion does not allow?

H.L.: Art has no limitations in any way — neither in form, material, or anything else, so everything is a possibility.

WWD: Is there anything that you would like people to consider as they pass through the galleries?

H.L.: I don’t like the idea that people should be programmed or influenced into what they are supposed to experience. Art should be experienced by everyone individually, and they will therefore react to it in their own personal way.

WWD: Does destruction lead to new depths of creativity? What does the MoCA show reveal about the times we live in?

H.L.: Destruction can definitely lead to new depths of creativity, either to create raw material for new work, or just getting rid of or adapting works that do not seem important anymore. Art is timeless and it reveals/reflects different emotions at different times.

WWD: When you were growing up in Vienna, how did you picture what your adult life would be?

H.L.: I did not think about my future. I’ve always taken one day at a time, one step at a time.

WWD: If people could see you at work in your studio on Long Island, what would they learn? What would shock them?

H.L.: Nothing is easy, but everything can be a pleasure.

WWD: How did the Greene Street studio fire change you? At this point, how many pieces have you shredded?

H.L.: The studio fire only changed the location where I work. At this point, I had already donated about 800 mostly complete silhouettes from my personal archive to 20 museums worldwide, as well as the entire corporate identity archive. About 9,000 single pieces, which had been partly damaged by the fire, were shredded to be used as raw material for new work. A good part of them are shown at the exhibition at MOCA Westport.

WWD: Why did you decide to move away from creations in direct context with the human body, and what have you discovered as a result?

H.L.: If you work in art, you are not working in direct context with the human body. The human interaction is on an emotional and intellectual level.

WWD: Who would you like to collaborate with for future projects?

WWD: Is it strange to have your name on fashion collections that you don’t design, or does that even resonate after all this time?

H.L.: It is not strange at all. It is really the model of most fashion houses around today. I think for the fashion audience it is quite normal, and they understand that there was a period when the founder was designing, and one when other creatives came in.

WWD: Considering how long ago you started streaming fashion shows, introduced “Urban Warriors,” showed women’s and men’s collections together and ventured into artist-designer collaborations, do you ever look at fashion now and think, “Been there, done that?”

H.L.: I’m certainly aware of my achievements and grateful for the many firsts, and that time has elevated these into an iconic status.

WWD: Are you ever tempted to get back into fashion?

H.L.: No. Definitely not in the way you’re thinking of.

WWD: Are there words that you live by or ones that you wish you did?

H.L:. I try my best every day, and let life unfold from there.

WWD: What or who intrigues you now in music, film, fashion, travel, politics?

WWD: Given the chance, how would you change the fashion industry?

H.L.: At the moment, I wouldn’t know. I would have to get familiar with how the industry is really functioning today. I left fashion in 2005 for good, so that is now 15 years out of the business.

WWD: What should people be paying more attention to?

H.L.: The climate, real sustainability, and equally important; to finally embrace the 21st century with equality, openness and kindness.

H.L.: I think it has mostly changed the way how anyone communicates. I would never support any work to be designed to impress on social media only, especially anyone who works with any creative matter.

WWD: Which artists today do you admire?

WWD: Is there anything people misunderstood about your work?

H.L.: Everybody is entitled to say what they feel about it, but over time the essence is always quite understood. It is also interesting that points of view and opinions are formed that I haven’t even thought about.

WWD: If you give yourself a few hours off, how will you spend that time?

H.L.: With friends and without a plan.