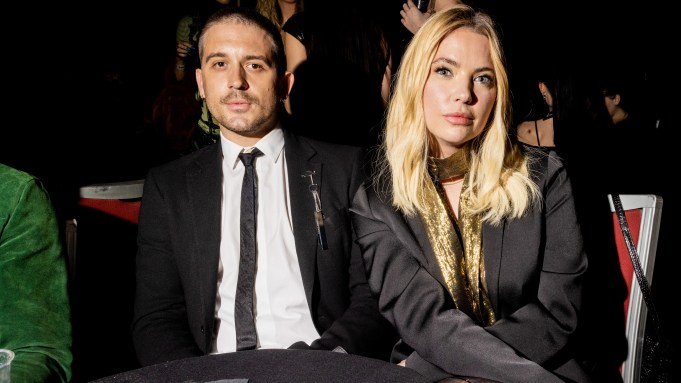 It was a buzzy energy of a rock show at Shane Gonzales’ spring 2022 fashion presentation for Midnight Studios on Wednesday night, shown in his native Los Angeles.

The designer, whose brand is rooted in elements of punk rock with DIY painted and printed T-shirts, showcased his known love of music throughout, starting with the setting of choice — El Rey Theatre, the live music venue on Wilshire Boulevard.

It was the first time he unveiled a high-end line.

“Up until now, Midnight [Studios] was very focused on graphics and T-shirts and hoodies and that’s what I had the resources to do at the time,” he said. “When the pandemic came about, I kind of took that time to just stop what I was doing and figure out who I am as a designer and what the brand could be going forward….I was able to find the resources to do the designs I’ve always wanted to do — suits, the bags, footwear, headwear, everything from head to toe.”

There was suiting made in Italy and leather goods, with clear references to punk rock culture, from the grooming — with spiked, colored wigs — to the Dr. Martens boots, as well as a nod to Andy Warhol superstar Candy Darling.

“While I was designing this collection, I just got so inspired by the whole do-it-yourself spirit that Warhol was kind of doing and bringing in his friends and family and turning them into stars,” Gonzales said. “I used all my friends and family to walk this show. Putting them on this platform meant a lot to me.”

It was all “friends and family,” in the audience, too, which included known faces in entertainment, from actors Ashley Benson and Ashton Sanders to music stars Ty Dolla $ign and G-Eazy.

“I’ve been fortunate enough to be in a cross between the music industry and the fashion industry for so long,” said Gonzales, who’s collaborated with the likes of A$AP Rocky. “A lot of these people, I consider my friends….It’s all family here.”

The designer had on a T-shirt featuring Ville Valo of Finnish gothic rock band HIM.

“This is an ode to my next collection,” he revealed.