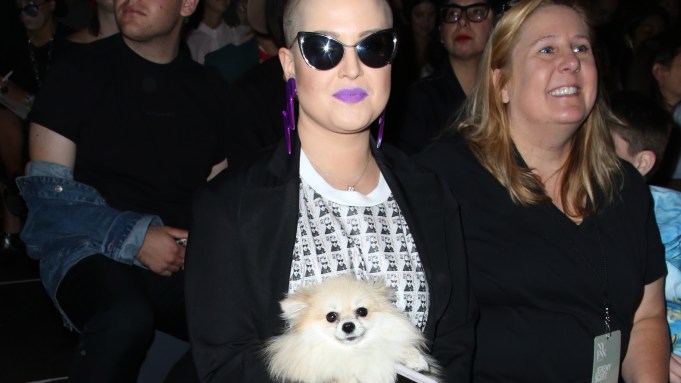 Ah, the front row. The most prominent seats during fashion week are ground for scoping out up-and-comers in music, film and fashion — and, more and more frequently, social media. Any number of designer darlings might be seated for a show, in subtle promotion of their upcoming single or Oscar contender. But this New York Fashion Week it wasn’t just celebrities and models getting flashbulb love — yes, it’s time we reflect upon the dogs of the front row. The four-legged kind.

The most ubiquitous of the front row dogs was a Pomeranian named Polly, who belongs to Kelly Osbourne. Polly was at Christian Siriano and Milly, and again at Jeremy Scott, innocently taking in the adoration and new collections from her perch on Osbourne’s lap.

Polly wasn’t the only pup on the front row scene — Gaia Matisse brought her dog Bambi along for Creatures of the Wind and VFiles. (Bambi sports her own Instagram account, should you desire to follow along in her daily adventures post fashion week.) A lap dog was also front row at Monse, perhaps checking out the hype around the buzzy label designed by Oscar de la Renta’s new creative directors.

At Carine Roitfeld’s CR Girls cocktail, a golden retriever was spotted in the crowd — and one was also seen front row at Zimmerman (Same dog? Could it be?).

And there was Thom Browne’s show, which featured the designer’s pup Hector and plenty of canine-themed accessories.

It appears that the dog days aren’t over quite yet.

Erica Pelosini's fabulous self bringing a yellow labrador puppy to sit #frow at Zimmerman is the absolute best. #NYFW

And a reappearance of the Hector bag for spring at Thom Browne (Hector is his dog) #NYFW pic.twitter.com/Xe87T2qbuF