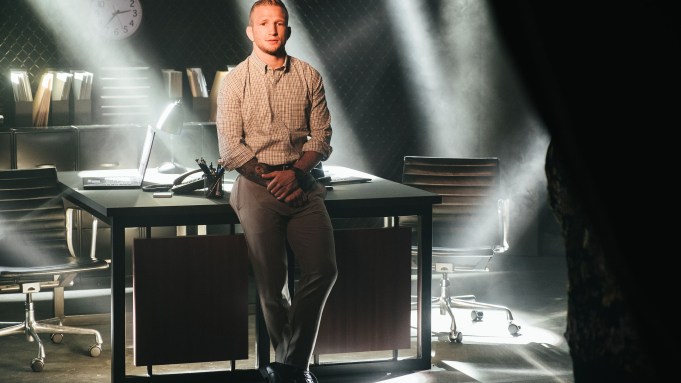 NEW YORK — Thanks to Conor McGregor and his meltdown at the Barclays Center in April, Ultimate Fighting Championship fighters have gotten a reputation for fighting outside the ring as well as inside the cage. McGregor was filmed throwing a hand-truck into a bus backstage at the arena that wound up injuring two fellow fighters. He pleaded guilty in a Brooklyn court last week, was sentenced to community service and served with an order of protection against the other fighters.

So it’s probably not all that surprising to learn that bantamweight champion T.J. Dillashaw and number-one ranked welterweight Stephen Thompson have now had their own grudge match.

But in this case, when Dillashaw, who is 5 feet 7 inches and weighs 135 pounds, was filmed leaping across a desk to go after the 6-foot-tall, 170-pound Thompson, it was all in fun.

The video, which is being released today, is the first glimpse into a partnership between the UFC, the world’s premier mixed martial arts organization, and Van Heusen.

The fighters were filmed this spring at a studio at Chelsea Piers in New York wearing the Van Heusen Flex collection. The video shows them sitting across from each other in an office setting, wearing suit pants and dress shirts from the Flex line. But when Thompson refuses to stop slurping loudly through a straw, it is too much for Dillashaw, who lunges at him over the desk. A cage comes down around them and it’s off to the races.

The two kick and punch, do backflips and perform other moves that show not only their athleticism, but the stretch properties of the garments. The video ends with Dillashaw throwing Thompson through the desk, which shatters underneath him.

The film is the centerpiece of a partnership that introduces Van Heusen as UFC’s first “Official Men’s Dress Furnishings Provider,” a deal that will include arena branding, commercial spots on YouTube, a strong social and digital campaign that will run through the end of the year and in-store signage at various retailers that will include images of Dillashaw and Thompson as well as the UFC logo.

The campaign kicks off the same week that Dillashaw will fight Cody Garbrandt at the UFC 227 event at the Staples Center in Los Angeles. The fight, scheduled for Aug. 4, will be the main event at the arena that night and will also be shown on pay per view. Van Heusen’s logo will be featured in the Octagon ring that night.

Mike Kelly, chief marketing officer of PVH Heritage Marketing and chief innovation officer for PVH, Van Heusen’s parent company, said that while neither man had ever done stunt fighting, he was “shocked at how fast they learned to throw a punch and not hurt one another.” He said they picked up the skills by working with stunt coordinators on the set.

From the fighters’ point of view, it was just pure fun.

“Now I know I can throw a head kick while wearing dress pants,” said Dillashaw with a laugh. “We didn’t use any stunt doubles, and it was awesome. We got to beat each other up and throw chairs at one another.”

And they walked away — unharmed — with a newfound respect and affection for each other.

“T.J. is awesome,” said Thompson. “We’ve known each other for a while and fought on some of the same bills over the years.”

The UFC’s reach has been growing in leaps and bounds since the brand started 25 years ago. It boasts more than 284 million fans worldwide and has produced more than 400 events in 21 countries since its inception in 1993. It produces more than 40 live events a year that are broadcast to over 1.1 billion viewers in more than 165 countries. Its fighters have become household names, particularly the top-ranked ones such as Dillashaw and Thompson.

As a result, Thompson said fashion has started playing more of a role, with fighters dressing up more for their time spent out of the ring. “We do a lot of media these days and try to look our nicest,” Dillashaw said. “With all the attention that our sport is getting, it’s nice to show professionalism.”

It doesn’t hurt, either, that both fighters look pretty good in tailored clothing.

Dillashaw said with MMA encompassing so many sports — wrestling, boxing, jujitsu and other martial arts — staying in shape is paramount. He watches his diet and trains hours every day, but as a new dad — his son Bronson was born at the end of last year — life is different. He’s also 32, so injuries are always looming in the background. “I always have bumps and bruises,” he said.

Thompson, who is 35, agreed. “I’m nursing some bruised ribs right now,” he said. “You never go into the ring feeling 100 percent.”

As a result, they’re both starting to think about their next chapters.

Dillashaw has his own gym in California that also offers instruction for kids under the TJ Dillashaw Youth Martial Arts Academy moniker. He’s planning to launch an online fitness brand and has his own seasoning company, Flavor Republic.

The latter was especially intriguing to Thompson. “That’s so cool,” he said.

“I’ll send you some,” Dillashaw responded. “They’re low sodium, low sugar — and tasting them is the best.

“I’m always finding routes with my name and building on that,” he added. “Maybe I’ll even do fashion one day — get my ‘Zoolander’ on.”

Thompson is also working with kids. The South Carolina native is the head instructor of the children’s program at Upstate Karate in Simpsonville, S.C. “I know what martial arts have done for me,” he said. “They’ve taught me integrity, self-control, perseverance and an indomitable spirit,” he said — all attributes he hopes to pass on to the next generation. “A lot of people think martial arts are just fighting, but it’s character-building, too, and I want to give back.”

In addition, Thompson has done some commentating on the sport, which he enjoys. “A lot of guys are going that route,” he said, adding with a grin: “And I’ve always got the fashion industry.”

He said back home in South Carolina, “everybody walks around in khakis and flip-flops, so any chance I get to wear a suit, I definitely take it. Nothing makes you feel as good.”

So while their fans may be more used to seeing them bare-chested and just wearing shorts, Dillashaw predicted that the UFC fans “are going to love” the video. “It’s going to be a huge hit. We’re bringing fight fans over to fashion,” Thompson added.

That’s the whole idea of the campaign.

According to PVH’s Kelly, he interviewed more than 20 fighters who were interested in being featured in the campaign before deciding on Dillashaw and Thompson. “They’re superhandsome, but guys can identify with them as well,” he said. “They have the right amount of ink and modern-day cachet, and their athletic abilities are unbelievable.”

The film, which is campy and fun, is also intended to appeal to Van Heusen’s new target audience, the Millennial male.

“Combat sports are so hot right now globally with the next generation,” Kelly said. “The social platform is very strong, too, and in fashion, we also had the opportunity to be first in.” He said while the UFC works with other big brands such as Budweiser and Harley Davidson, “there’s nobody else in fashion.”

Paul Asensio, senior vice president of global partnerships for the UFC, praised the Flex Collection, saying it allows its fighters “to wear stylish and flexible business attire without compromising their comfort, individual style or look.”

The line is available at department stores including Macy’s, J.C. Penney and Kohl’s, as well as on the Van Heusen web site.