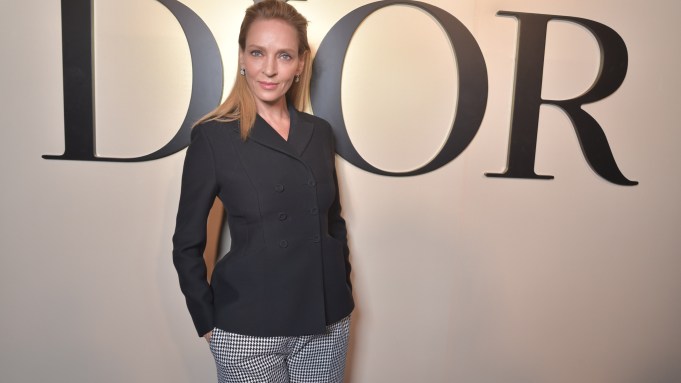 FEMALE ENERGY: Most of the guests entering the structure that housed the Dior fall 2020 haute couture show on Monday were oblivious to the fact that the 300-foot-long installation represented a reclining goddess — minus the legs.

“I am walking toward my history,” joked singer Christine and The Queens as she crossed the entrance, which technically represented the goddess’ birth canal.

Chimamanda Ngozi Adichie was unruffled about the unorthodox show set. “I think it’s not a question of breaking taboos just to break taboos, it’s also a question of talking about what needs to be talked about in the world we live in,” said the Nigerian author, whose work inspired the “We Should All Be Feminists” T-shirt in Maria Grazia Chiuri’s first show for the house in 2016.

“I really, really respect Maria Grazia not just for her courage, but also her authenticity,” continued Adichie. “She’s doing this because it matters to her.”

The set was designed by artist Judy Chicago, best known for her installation “The Dinner Party” on show at the Brooklyn Museum in New York, which gives famous women throughout history and culture a literal seat at the table — as well as hand-painted plates depicting elaborately stylized female genitalia.

Inside the huge tent, the artist — who has often used needlework in her projects — hung 21 banners embroidered in English and French, starting with the question “What if women ruled the world?”

It prompted guests to reevaluate their sewing skills.

Actress Amira Casar, who has just finished filming “Violence of Action” with Chris Pine, remembered having taken sewing classes at school in England. “We learned how to do ruching and smocking,” she recalled. “I made a teddy bear in a smock dress for my sister. I think she still has it in a box somewhere.”

Monica Bellucci admitted to only having basic skills.

“I know how to sew, but I couldn’t make a dress,” shrugged the actress, who will be reading iconic opera singer Maria Callas’ letters on stage at the Bouffes du Nord in Paris in February.

For the Italian actress, Judy Chicago’s panels weren’t only artworks — they were messages.

“We are living through historical times,” said Bellucci. “Women have more courage to speak up, which means they are less afraid, which also means that things are slowly changing.”