A week of junior social events kicked off on Tuesday with The Museum of Natural History Winter Dance, where Roberto Cavalli – the evening's sponsor – was flanked by a slew of PYTs. 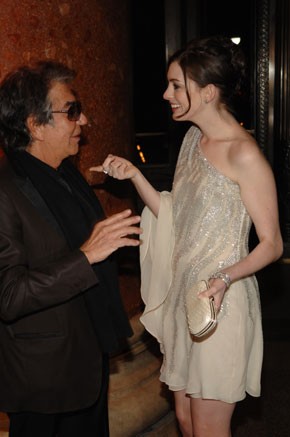 A week of junior social events kicked off on Tuesday with The Museum of Natural History Winter Dance, where Roberto Cavalli – the evening’s sponsor – was flanked by a slew of PYTs including Anne Hathaway, Mary-Kate Olsen, Margherita Missoni and Barbara Bush.

“It’s nice to have two men fawning over you,” said Hathaway, who arrived on the arm of beau Raffaello Follieri, and called Cavalli “a second date.”

Dinner was served in the Hall of Biodiversity (a.k.a. the plant room), which was appropriately decorated with floral Cavalli print table linens, per the evening’s “Enchanted Forest” theme.

“I used to come here all the time when I was a Jersey girl,” said Hathaway, who grew up in Millburn, N.J.

Dessert and dancing followed underneath the 60-foot blue whale in the Hall of Ocean Life, where scores of youngsters including Jessica Stam and Lily Donaldson mingled amid silent auction items.

Did Cavalli have plans to bid on anything? “Auction?” the designer asked his handlers, clearly unaware he’d donated the evening’s grand prize – tickets to his next show in Milan, several dresses, some men’s clothes, and lunch at the Just Cavalli Café in Milan.

“We like to keep everything a surprise for him,” said one of his prs.