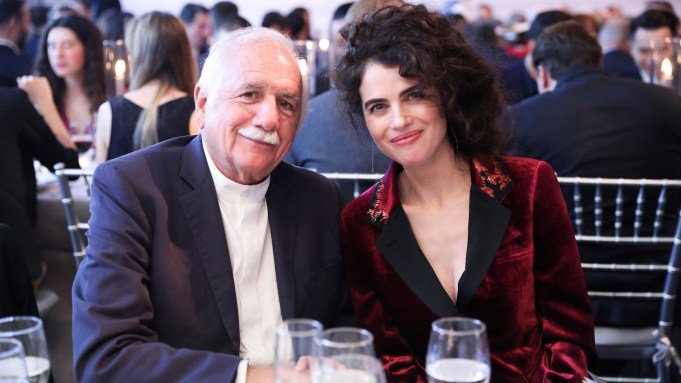 Architect and urban planner Moshe Safdie’s portfolio is packed with more than 50 years of striking and sky-soaring projects.

Before Thursday night’s National Design Awards at the Cooper Hewitt, Smithsonian Design Museum, Safdie said fashion is something that has always intrigued him. Recognized for his socially responsible design and distinguished style, Safdie began as an apprentice to Louis I. Kahn in Philadelphia. A citizen of Israel, Canada and the U.S., Safdie runs offices in Boston, Jerusalem and Singapore. Globetrotting goes without saying, but Safdie is anchored by taking the long view on design.

How the fashion industry needs to change is something he has mulled over for years. “It’s a big question, because I have watched the fashion industry as kind of an outsider with fascination. I recognize that on one hand, there has to be a fair amount of capriciousness. It’s human nature. Fashion is about embellishing one’s self and signaling one’s identity. At the same time, as an architect, I sort of believe in the traditions of evolution and that clothing should be useful, functional and comfortable,” he said. “Fashion swings like a pendulum. Sometimes there are extremes of what appears to be almost ridiculous. Define what the nature of clothing wants to be, so to speak.”

In another life, he might have been a fashion designer, but his current workload prohibits that. Safdie said, “I’m often kind of curious, if I devoted myself to fashion design, and I’m tempted sometimes, how would I reconcile this desire for novelty and the deep philosophical belief that things should work in terms of how you live with our clothes?”

There is the never-ending pull of intercontinental projects in development. “Architecture consumes me, so I’ve got to be pushed. Someone has asked me to design a watch now. I’ve dabbled with furniture. I designed my own shirt [planting a hand on his collarless white shirt]. I’m going to do the watch. I got talked into it. The company is with Project Watches. I did one with them years ago, but it was not a serious exercise,” Safdie said. “There are all these watches that have lots of novelty about them — eye-catching, you can’t quite read the time, you have to decipher it. My feeling was look at all the electronic watches and all the information that they give you. How do you reconcile a $50,000 Rolex with a $400 Apple or $500? One just tells you time and the other is a miracle. You could extend that question to fashion, too. It is a complicated question. I think about it so much.”

Slim on details regarding most of his upcoming work, Safdie sounded like the consummate underseller. “I’m busier than ever. I came from Quito [Ecuador] this morning. I’m doing an apartment complex [the Qorner consisting of Lego-like staggering floors with planted balconies]. I’m working on a medical school in São Paulo. [The Albert Einstein Education and Research Center will have a series of garden courtyards at its center with a vaulting glass roof designed for inventive shading.] I’m working on a hospital in Cartagena. [Designed with input from John Hopkins International, the four interconnected waterfront buildings will have planted roofs. The effort will be Safdie Architects’ first project in its master plan for the Colombian city.] Then I have work in Asia, a major project in Chongqing. [Set up to be in range of the city’s transportation and systems, Raffles City Chongqing will have eight towers – four of which will be bridged with a sky observatory.]”

The prized architect did show a glimmer of pride in what he has in store for Changi Airport in Singapore. He said, “At the airport in Singapore, I am opening a project called ‘The Jewel,’ which is the biggest garden ever built under a glass roof. I’m very excited about that. It’s going to change what airports are all about. Game-changing.”