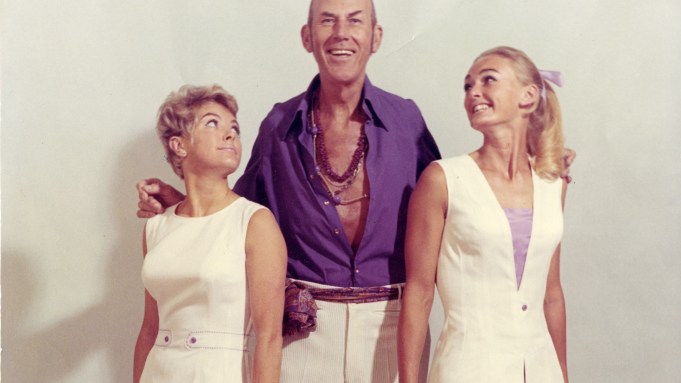 On Monday, the gates of the USTA Billie Jean King National Tennis Center in Flushing Meadows-Corona Park, N.Y., will welcome Rafael Nadal, Novak Djokovic, Roger Federer, Serena Williams, and Maria Sharapova and other greats for the U.S. Open. These athletes — some of the wealthiest in professional sports — will enter the complex’s arenas literally blanketed in endorsements: wearing sponsored wristwatches, sneakers, clothing and racquets, for which they were paid millions to wear.

In fact, it’s become customary for matches between today’s tennis greats to serve as both an exhibition of athletic force and a graceful look at billboards-on-the-move.

But the game of tennis was not always this commercialized. In the prior century, rather than walking out onto center court swathed in sellable swooshes and crocodile insignias, tennis players wore one-of-a-kind couture, the best of which was designed by International Tennis Hall of Famer Cuthbert Collingwood “Ted” Tinling. Not only did players wear Tinling’s creations, but they paid him hundreds of dollars to do so.

Tinling’s one-of-a-kind designs were created to suit the on-court personas of tennis greats from Suzanne Lenglen to Tracy Austin, and were the de rigueur uniforms of champions from the Forties through the late Seventies. Utilizing lace, sequins, ribbon and rickrack, Tinling is responsible for injecting the staid and bleached world of tennis fashion with a sense of humor and color.

“He wouldn’t give players endorsements for clothes. They had to buy them,” said Nicole Markham, curator of collections at the International Tennis Hall of Fame in Newport, R.I. “[Tinling] would never design for someone until he had seen them play, and each one was made for that particular player and their style of play and personality. He was the first to play with different textural elements and introducing color into a sport where it was always white.”

Tracy Austin’s hallmark sweet-cotton eyelet shifts and Billie Jean King’s sharp collars were all innovations from Tinling’s (and his seamstress Margaret’s) hand. He also had an influence in the on-court looks of Martina Navratilova, Virginia Wade and Rosemary Casals, among many others. Many of these designs have since found a home at the International Tennis Hall of Fame, which has preserved, catalogued and curated a large cache of Tinling’s archives. The Hall of Fame inducted Tinling into its ranks in 1986, and he is the only fashion designer to have received that honor.

An Englishman reared in the French Riviera, Tinling’s rise to tennis stardom began in the Twenties when, after refereeing a match, he met early 20th century tennis star Suzanne Lenglen, whose flapper-type, on-court attire made her his muse. Tinling used his inheritance to set up a dress atelier in London, and employed a staff of more than 100 to produce ballgowns and eveningwear for debutante socialites.

A career hiccup came courtesy of World War II, at which time Tinling departed from his clothing business to serve as a lieutenant colonel in the English army’s intelligence division (after his death it was revealed that he had actually served as a spy).

Upon his return from war, Tinling decided that “instead of going back into haute-couture ballgowns, he decided to focus on sportswear, which no one was really doing at the time,” Markham said. This made him something of “a paradox — you don’t see couture fashion in sportswear all too often,” said Markham.

Tinling’s first tennis design was created for Joy Gannon’s 1947 appearance at Wimbledon, for which he incorporated a pink-and-blue hem that sent the All England Club into a state of shock since its rules were — and remain — that a player’s outfit must be predominantly white.

His breakout moment came at 1949’s Wimbledon, for which Tinling added lace trim to the hem of Gussie Moran’s undershorts — creating a scandalous moment that has become tennis legend.

From there, Tinling enjoyed a steady stream of Grand Slam-bound ladies pining for his designs. In the Seventies, he was employed by the Virginia Slims Circuit (an early predecessor to today’s Women’s Tennis Association) to create designs for the tour’s players.

In his career’s later years, the lanky, outspoken and totally bald Tinling shared a close relationship with teenage sensation Tracy Austin, who wore Tinling designs to capture U.S. Open titles in 1979 and 1981.

The two first met in 1977, after Austin won a custom Tinling jacket as part of her prize package for a title in Philadelphia. The two became constant collaborators thereafter, with Tinling even bequeathing Austin his single pearl earring after his death in 1990.

“Ted was a character with stories galore — we had a great relationship,” Austin said. “I was always a very curious young lady, I would ask a million questions about the history, all the champions, and he loved to talk about his craft….He tried to make women understand that they were athletes but tried to make them feel beautiful on the court.”

Austin would commission up to seven dresses at a time, and unlike in today’s tennis world, would wear a different dress in each stage of a tournament. “I would never have thought of wearing the same outfit twice. It’s a different thought process now that they are selling product,” she said. “Now a player will get an outfit and they wear it for an entire tournament, they are getting paid millions of dollars. I paid for every one of those dresses. Not only was I not paid, I was paying for them.”

Despite Tinling’s couture leanings, he was excited by the advent of brands like Ellesse and Fila getting into the sport with technical fabrics and sponsorships.

Said Austin, “I would have loved for Ted to live in this era and to see what he would have done with these materials that were not available.”