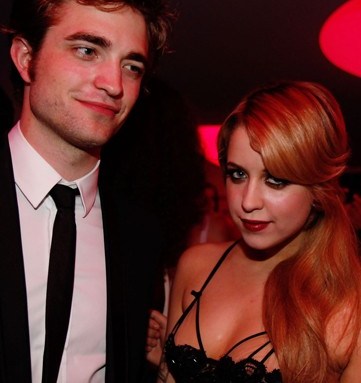 Changing frocks is a good way of getting attention, not to mention doubling one’s photo opportunities, as Sharon Stone proved Thursday night. The age-defying actress wowed guests when she exchanged her long Dior gown for a body-conscious, supermini Pucci number for amfAR’s after-dinner party. “Make sure you get my good side,” she joshed, winking at the paparazzi as she emerged from the Hotel du Cap’s central glass elevator.

Already inside the event, which was held at the hotel’s Eden Roc site, were Carine Roitfeld, Emile Hirsch, Elsa Pataky, Josh Hartnett and Alison Lohman.

Meanwhile, “Twilight” vampire Robert Pattinson admitted he’s been mostly sticking to daylight hours during the festival. “Every party I go to, I get mobbed by the paparazzi,” lamented the Brit-born actor. He’s signed on for the fourth movie in the “Twilight” franchise and said Los Angeles living is having an impact. “I’m losing my accent,” he drawled.

The guest list also included billionaire members of Luxury Limited Edition by Cynthia Sarkis, who cohosted the soirée with Vogue. Sarkis took the opportunity to officially launch her ultraprivate luxury Internet platform, which sells big-ticket items like Van Gogh paintings and yachts to its clientele. “It gathers the world’s great fortunes who have high spending power and have also succeeded professionally,” explained Sarkis, whose goal is to attract 250 members.