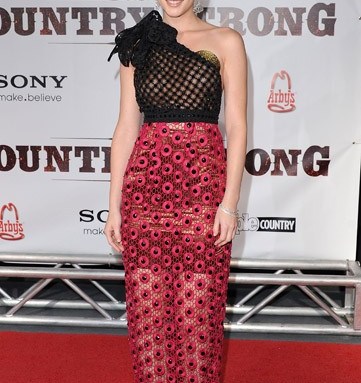 Stars have been stretching their legs (to mixed effect) on the red carpet in floor-length gowns with sheer skirts in recent weeks. Jennifer Lopez struck a dramatic pose in a heavily bedazzled Georges Chakra confection, with beading that gradually diminished and eventually disappeared entirely around her right knee. Leighton Meester’s one-shouldered Marc Jacobs dress gave the effect of a little black dress with a window treatment wrapped around her waist, while Heidi Klum attempted to strike a balance between a demure silhouette and a daring fabric in a vintage Thirties piece. Rather than make the ostensibly difficult choice between a short dress or long, Julianne Hough of “Dancing with the Stars” opted to wear a black lace Marchesa frock, the lining of which ended mid-thigh, though her hem pooled around her feet like a large inky puddle. An extremely coordinated Rihanna matched her crimson locks to her lace Elie Saab Couture backless gown, the floral pattern of which effectively shielded her more sensitive assets from the glare of the cameras.