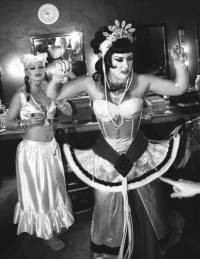 L.A.’s favorite neo-burlesque troupe, Velvet Hammer — the ensemble that has spawned imitators from London to San Francisco — ended its annual fall run last Thursday with a full night of dancing queens and bawdy sketches, proving once again that no one does vaudeville quite like they do.

Blonde bombshell Kitten DeVille (currently on the silver screen in “Auto Focus” as, what else?, a burlesque dancer) zipped off a gold-sequined sheath. Scarlette Fever marked her voodoo number with a live six-foot snake and Valentina Violetta (aka show founder and producer Michelle Carr) closed her act wielding a man’s head — body not included. Of course, another major draw was the trio of 50-something go-go gals in second-skin getups and heels, better known to some onlookers as the stars of “Faster, Pussycat! Kill! Kill!,” Russ Meyer’s 1965 B-classic.

Dressing in requisite corsets, seamed stockings and stilettos wasn’t limited to those on-stage either. Vintage-decked fans and fetishy punks packed the audience.

Still, Velvet Hammer is always one step ahead of its audience. Outside, a half-dozen conservatively clad protesters held signs proclaiming “the Virgin Mary never stripped” and yelled at the incoming guests to redeem themselves. Not everyone got that it was part of the show. After all, even burlesque fans can be a bit uptight.